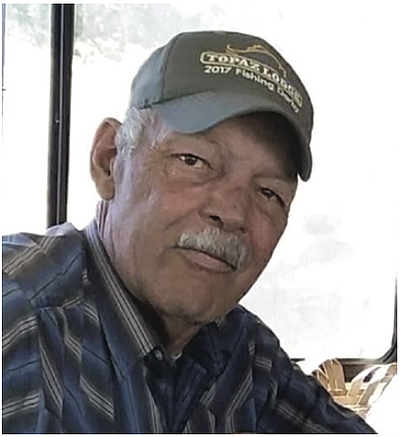 MSgt Jack Pomeroy of Wellington Nevada died on Saturday September 3, 2022, surrounded in love by his family, he was 66 years old.

Jack was born on February 14, 1956, in Barstow, Ca. to Melvin Wayne and Evelyn Lovida Pomeroy. They moved several times during his childhood however most of his childhood was spent in the Pueblo, Co. area. His family enjoyed hunting, fishing and cutting wood which he in turn has passed on to his children.

Jack joined the United States Marine Corps in 1975 and completed bootcamp at Paris Island, South Carolina. From Paris Island he transferred to Adak, Alaska for a short time before transferring to Fort Worth, Texas where he met the love of his life, Carol Ann Grimmitt. They were married on May 30, 1980, in Irving, Texas where they had their first son Joe Ray. They moved to Adak, Alaska in 1981 which is where their second son Keith Allen was born in 1982. Jack transferred to Camp Lejeune in North Carolina until 1985 when he was transferred to Camp Pendleton in Oceanside, California. While based at Camp Pendleton Jack was sent oversees to Okinawa Japan and Thailand from 1985-1987. In 1989 he transferred one last time to the Mountain Warfare Training Center in Bridgeport, California, their third and final son Kenneth Lee was born in Wellington, Nevada.

Jack managed the mess hall at the M.W.T.C. in Bridgeport, California until he retired in 1996. Between 1996-2000 he owned and operated an automotive repair shop in Wellington, Nevada. In 2000 he returned to M.W.T.C. to manage the mess hall as a civilian, he retired again in 2018.

He was proceeded in death by his father Melvin Wayne Pomeroy, his son Keith Allen Pomeroy and his grandparents.

Services will be held at Eastside Memorial Park in Minden, Nevada on Saturday September 10, 2022, at 10:00AM.