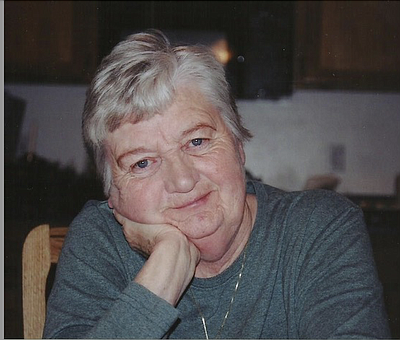 Patricia Whyte Smith passed away peacefully on her 83rd birthday at home in Carson City with her children by her side after a cancer diagnosis in February. Cancer sucks.

Pat was the sixth of eight children born to Dorothy and Howard Whyte in Sydenham, Belfast, Northern Ireland, and was the last surviving sibling. Her father was a decorated WWI battlefield officer commissioned by King George V and her mother was a loving homemaker. Pat survived the aerial bombings of Belfast during WWII and studied the arts and theatre growing up in Belfast. She met her late husband, Barney Smith who was serving in the US Air Force in England, at a chance encounter in Dublin in 1959 after Barney’s flight had to make an emergency landing. They were married in England in 1960, and at the end of Barney’s enlistment, they settled down in Corralitos, Santa Cruz, California where Barney worked as a Sheriff’s Deputy and Pat worked for a civil engineering company. Pat resettled in Carson City after Barney’s death in 1998. She retired from the Forestry Division of the State of Nevada after 10 years. Her avocations included playing the piano and writing stories and poetry.

Pat was a spiritual, generous, selfless, and loving person and said that life is the most wonderful gift we have, and that we should make the most of every good thing in our lives. That was how she lived her life.

Pat wrote a poem for her grandchildren for Christmas not long ago that we want to share.

You’re standing on the threshold of today
the fullness of each hour stretched out before
The choices that you make or games you play
determine what the future has in store.
If you can see that all your yesterdays
were steps you took that brought you here and now
Then you have touched the keystone of your life
and understand the reasons why and how.

She leaves her three children, Catherine Vairo, David Smith and Patricia Smith of Carson City; seven grandchildren Robert, Michael, Nicole, Matthew, Kaitlin, Brendan and Jackson in Carson City; three great-grandchildren Bobby in Oregon and Foster and Briar in Arizona, nieces Irene and Angela and nephew Barry in Canada; nephew Jackie in Northern Ireland; nephews Stephen,Eric, Alan and Ian in England; nephews Jack and Donny in the Bay area; and multiple grand-nieces and nephews and their spouses around the world.

It's not true that you can’t take anything with you when your body dies; Pat left us her love but took with her the eternal love of her family, and you can’t ask for anything more than that. Goodbye Mom, Grandma and Aunt Pat, we love you and will miss you.

In lieu of flowers, please make a donation in Pat’s name to the Huntington’s Disease Association of Northern Ireland in memory of Pat’s nephew Phillip Whyte. http://www.hdani.org.uk/