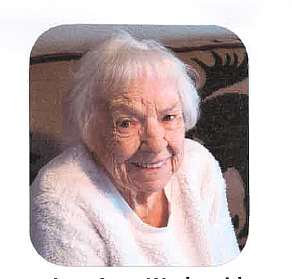 A Dayton resident since 1988, Jane left this world at the age of 92 in peace and the presence of her family to be with her lord and the love of her life Wayne J. Wachtveeitl, her dog Button and past family members.

Born to Pearl May Bell and Carl Allen in Beaver Dam, WI. Jane went to Appleton West High School where she was part of the Drill team and enjoyed activities of being part of the team. Jane worked after school in her dad’s store at the soda fountain. During her school years, in 1945 she met her forever love and high school sweetheart Wayne J. Wachveitl. After graduation they married on Wednesday July 2, 1949.

With no time at all their family began to grow, and before she knew it, she was a mother of 5 girls: Pamela, Constance, Debra, Cheryl, and Lori. Jane was fortunate to be a “stay at home” mom. Living in Appleton Jane was involved in her daughter’s activities like Brownies, Girl Scouts, Campfire Girls, and school activities. She enjoyed camping, fishing, backyard fun with her neighbors, building a sand box, holding a hose to fill a pool, and decorating inside and out for the holidays. There was always some activity to keep her busy and she enjoyed it all.

Jane and Wayne decided to move to Southern, CA. in 1966. After living in a large city, they decided to find a quiet lifestyle and with several of her daughters married they moved to Ukiah in Northern CA in 1973 where they lived the country life with several animals. They finally retired and moved to Dayton NV in 1988.

She was heard stating that her greatest accomplishments in life have been her family.

Viewing and services will be held at Dayton Valley Community Church of the Nazarene, 407 V & T Way Dayton, Nevada on March 23, 2022, at 10am. Family burial to follow at Dayton Cemetery, Dayton, VN. Services will be officiated by Pastor Ken Goode of Dayton Valley Community Church and Pastor Jeff Blizzard of the New Covenant Assembly of God
Church in Silsbee, TX.

Arrangements are being coordinated by Walton’s Funeral and Chapel of the Valley, 1281 N Roop Street, Carson City, NV 89706.

She was loved and will be greatly missed by her family and friends. She has left a hole in our hearts.