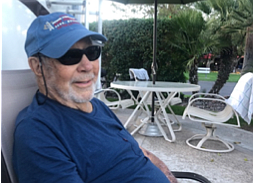 Bob passed away at his winter residence in the Palm Springs area after a recurrence of prostate cancer. He was 88 years young and kept his wonderful sense of humor and positive outlook on life to the end. In his final days he was visited by many of his family and loved ones. He lived a memorable life and will be greatly missed.

Bob was born in Philadelphia, PA, to Amos Lee Maples and Helen May Maples (nee Dolan). He and his mother moved to California in 1934 where he graduated from Long Beach Poly High in 1951. Soon after Bob joined the Navy Reserve and was activated during the Korean War.

Bob married the love of his life, Marjorie June Brockwehl, on March 18, 1956. He graduated from USC in June 1958 with a bachelor’s degree in Public Administration and later received his master’s degree from Cal State Northridge.

Bob and Marj raised three loving children, Chris, Jeff, and Jenni. Although both parents worked, time with family was always a priority and for many years the family vacationed each summer at Huntington Lake, CA and made many trips throughout the Sierra Nevada, California, and Nevada.

Bob was Personnel Director for the City of Santa Monica prior to moving the family to northern Nevada in 1969. Over the years, they lived in Carson City, Incline Village and finally, Reno. Bob retired from the Washoe County School District as an Associate Superintendent in 1993.

Bob always enjoyed learning about the world around him and traveled extensively throughout his life including trips to Mexico, Canada, England, France, Spain, Portugal, Morocco, Egypt, Turkey, Greece, Israel, Lebanon, Hong Kong, China, Vietnam, India, Myanmar, Peru, Ecuador, Norway, Sweden, Denmark, Germany, Austria, Switzerland, Italy, Tahiti, and the Caribbean. He also liked hiking, sailing, skiing, and fishing, but mostly enjoyed being with his family and loved ones. The pride and joy of his life were his grand and great grandchildren, who all called him “Pop-Pop” and loved him dearly.

In 2004, Dad met his loving companion Linda Baker of Tacoma, WA while leading a hike in Palm Springs. Together, they traveled and spent time in Reno, Palm Springs, and Tacoma.

Per Bob’s wishes, a small family service will be held, and his ashes will be combined with Marj’s and spread at a location special to them. In lieu of flowers, please consider a donation to The American Cancer Society, the Truckee Donner Land Trust, or The Nature Conservancy.