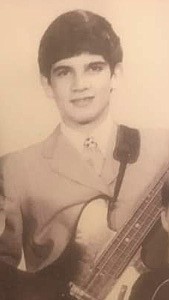 James Johns, 69, died peacefully at Renown Regional Medical Center in Reno, on March 1, 2022. Jim passed related to an extended illness and was in the loving presence of his wife and two sons.

In 1952, Jim was born in Toronto, Ontario, Canada to William and Elizabeth Johns. Jim moved to Carson City in 1965, where he attended Carson High School. Jim played football, was a member of the track team and was active in the school band. He, also, worked during these early years, which included a job at the local Sears Store. Jim and his brother Monty Johns and his late brother Ward Johns, formed a rock group they called "Brother Rock." They were very good, all quite handsome and played for many venues around Northern Nevada. Jim graduated from Carson High in 1970. Unfortunately, Jim was not able to attend his graduation due to a very tragic diving accident at Lake Tahoe on May 26, 1970. As a result of this accident, Jim was paralyzed and confined to a wheelchair for the remainder of his life. However, Jim never let his disability stop him from living his life to the fullest. He received his bachelor’s degree in Social Work from UNR and his master’s degree in Rehabilitation Services from UNLV.

While in college, Jim became a Born Again Christian and lived the rest of his life serving The Lord. Jim attended various churches in the Reno area and participated in the Worship Services held there. He met his wife, Vikki Barker Caffaratti in a church singles group, and they were married in October of 1981.

In 1992, Jim coached his two son's roller hockey team. He worked at Sierra Counseling, which he owned from 1994 until 1997. Thereafter, Jim and his family moved to Canada and later to Clarence, NY, where he worked for the New York State Department of Education as a Counselor Assistant. Jim moved back to Nevada in 2013, as he truly missed Nevada and his friends. Nevada was always home to Jim.

In his later years, Jim spent his time perfecting and enjoying his many hobbies, including playing his base guitar, building Civil War Dioramas, playing chess, watching hockey and football games on TV, talking to friends via FB Messenger and by telephone, drawing pictures, especially of human faces, perfecting the "eyes" and drawing many sketches of the Beatles. He loved sharing his sketches with his friends via FB Messenger. Jim especially loved going to the movie theater.

Jim is survived by his wife Vikki Johns, sons David Johns and Christopher Johns, his grandchildren, Scarlett Johns and Jesse Johns, and his brother Monty Johns.

Jim was preceded in death by his brother Ward Johns.

A small graveside funeral is planned for immediate family.