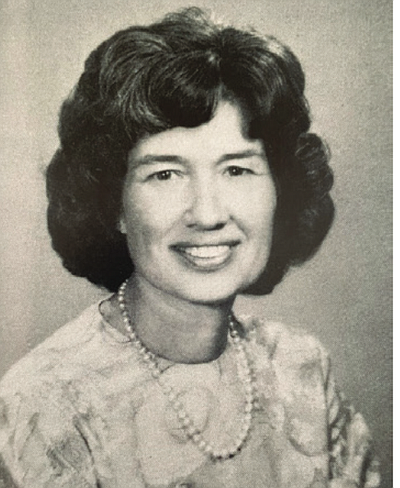 Our beloved mother, grandmother, and great-grandmother, Helen June Jones, finished her mortal life and returned to her heavenly home on June 18, 2022 after suffering a stroke. She was 100 years old.

Helen was born in St. Louis, Missouri on October 14, 1921 to Roy Harold Birt and Beulah E. Needs. Her father’s work took their family to several states until they settled in Parsons, Kansas, where Helen met her eternal companion, Joseph Winchester Norvell, a Master Sargent in the army signal corps during WWII. After Joseph’s retirement from the military, they lived in San Mateo, California, then moved to Carson City, Nevada in 1959, where Joseph died following surgery in 1961, leaving Helen with four young children to raise.

Suddenly finding herself in need of income, she took a position teaching at the Stewart Indian School outside Carson City while she completed her Bachelor of Fine Arts degree in Music. After completing her education, she was hired by the Ormsby County School District to
teach General Music. Within a very short time, she had become a choir instructor at Carson High School and had organized a string program in the local schools. After a few years, a better position opened in Reno in the Washoe County School District, and she moved our family, so she could take the position. She built an outstanding string program at every school where she taught and was beloved by her students. She played every string instrument well and was also very accomplished on the piano. Her children remember her van being full to the brim with music stands and instruments that she carted from school to school. She also had several private students.

Finding the income of a teacher to be insufficient for the needs of her family, Helen took a second fulltime job as a hostess then waitress. She worked that job simultaneously with her fulltime teaching job for 15 years. Mother had unmatched strength, endurance, and determination. When she retired at 65, she sold the family home in Reno and purchased five acres of prime land in Gardnerville, Nevada, where she worked a large garden and orchard for over twenty-five years. Her freezers and pantries were always full of the bounty produced by her hard work. She loved every moment of it and only slowed down in her nineties, when age began to take its toll. During that time, she also continued teaching private music lessons until she was nearly 95.

While in Gardnerville, she married George Jones whom she met at church. They were together for over twenty years until his death in 2013.

Our mother sacrificed everything she was and had for others, most especially her family. She loved and forgave everyone and always placed the comfort and needs of her family above herself. She had great faith in God and lived according to her beliefs. She was a devoted member of the Church of Jesus Christ of Latter-Day Saints and gave her all in serving others. She was a great example of Christlike love. For sixteen years, she served as her congregation’s choir director, a calling she loved and to which she gave her heart.

Our hearts are full of the very deepest love for her, and we will miss her dearly.

Helen was preceded in death by her parents, her husbands Joseph and George; siblings John Harold Birt and Emmaly Jane Kucera; and her son Wyatt.

She is survived by her children, Harlow Norvell (Cindy), Wanda Luce (Darrell), and Belva Tomany (Ed), and her son Wyatt’s companion, Mary Ross. She is also survived by seven grandchildren and fifteen great-grandchildren.