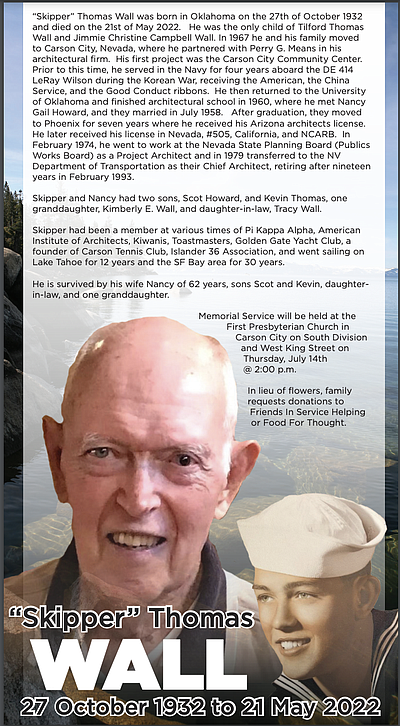 “Skipper” Thomas Wall was born in Oklahoma on the 27th of October 1932
and died on the 21st of May 2022. He was the only child of Tilford Thomas Wall and Jimmie Christine Campbell Wall. In 1967 he and his family moved to Carson City, Nevada, where he partnered with Perry G.
Means in his architectural firm. His first project was the Carson City Community Center. Prior to this time, he served in the Navy for four years aboard the DE 414 LeRay Wilson during the Korean War, receiving the American, the China Service, and the Good Conduct ribbons. He then returned to the University of Oklahoma and finished architectural school in 1960, where he met Nancy Gail Howard, and they married in July 1958. After graduation, they moved to Phoenix for seven years where he received his Arizona architects license. He later received his license in Nevada, #505, California, and NCARB. In February 1974, he went to work at the Nevada State Planning Board (Publics Works Board) as a Project Architect and in 1979 transferred to the NV Department of Transportation as their Chief Architect, retiring after nineteen years in February 1993.

Skipper and Nancy had two sons, Scot Howard, and Kevin Thomas, one
granddaughter, Kimberly E. Wall, and daughter-in-law, Tracy Wall. Skipper had been a member at various times of Pi Kappa Alpha, American
Institute of Architects, Kiwanis, Toastmasters, Golden Gate Yacht Club, a founder of Carson Tennis Club, Islander 36 Association, and went sailing on Lake Tahoe for 12 years and the SF Bay area for 30 years.
He is survived by his wife Nancy of 62 years, sons Scot and Kevin, daughter-in-law,and one granddaughter.

In lieu of flowers, family requests donations to Friends In Service Helping or Food For Thought.