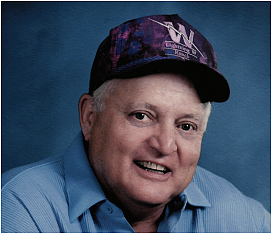 It is with great sorrow that we announce the passing of our beloved patriarch Donn Nils Simons. He passed peacefully on May 30, 2022 surrounded by his children and grandchildren.

Donn was born in Alhambra California on July 20, 1934, the youngest son of David Herman and Regina Pearl Simons. He married Linda Rae Williams on April 18,1953. Donn moved his young family to Carson City in 1960 and founded Artistic Fence Company in 1963. Donn loved the water, camping and water skiing at Lahontan in the 60’s and 70’s and with his boat the “Great Scott” at Lake Tahoe in later years. Donn was blessed to have traveled to many countries around the world. He was very competitive and sponsored a softball team for years and felt like a father to many of the team players. Donn loved spending time with family and friends and was known to have great barbecues on the Fourth of July prior to watching the fireworks from his home. He had a huge circle of friends at Glen Eagles where he could be found most Friday nights. Donn is survived by his daughter, Joanne Dietrich (Ken) and son Donn Roderick Simons (Jeanne), grandchildren Jessica, JoeDonn, Ryan, Dana, Daniel and April and great-grandchildren Brea, Bella, Sofia, Wyatt, Zoey and little baby Lola. He is predeceased by his wife of 54 years, Linda and daughter Suzie, and his brothers Dave and Paul and sisters June and Lorraine.

A celebration of life will be held at The Plaza, 211 E. 9th Street on July 16th, 11:00 a.m.-2:00 p.m. Please join us to share some of your favorite stories about Donn. In lieu of flowers, contributions can be made to the Parkinson’s Foundation: www.parkinson.org