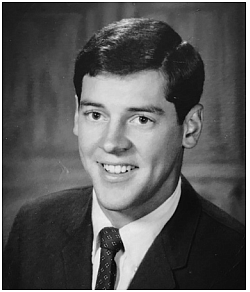 He was a salesman from the start, selling his food broker dad’s “samples” out of his wagon to neighbors. He graduated from Glendora High School in 1965 and from the “University of Spoiled Children” USC in 1969 with a BS (emphasis added!) in Business & Marketing. He was a commissioned 2nd Lieutenant in the US Air Force and took a deferment from the Vietnam War to get his MBA from the University of Nevada, Reno. This is where he fell in love with Nevada, the Washoe Valley & Lake Tahoe. He worked in the gaming business at Harrah’s Lake Tahoe & also had his own real estate business, Mountain Investments. Larry was an avid golfer, skier, fisherman, biker, hiker & all things outdoors. He met the love of his life, Claudia while teaching a business course at Western Nevada College. They were married in 1984 and welcomed daughter, Lindsay (graduate of CHS & UNR) in 1985. Larry taught at WNC for 30 years and was a member of the Foundation Board of Trustees. He also enjoyed serving with the Rotary Club of Carson City. Life for Larry was fun, full & fulfilling.

He passed away peacefully on January 11, 2022 & is greatly missed by his family & many friends. Memorials may be sent to Western Nevada College Foundation intended for a scholarship to a deserving business major. Contact Niki Gladys @ 775.445.3239 or foundation@wnc.edu