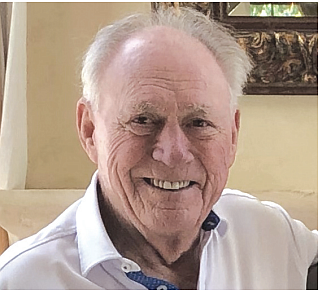 Gerald (Jerry) Orsen Nielsen, 82, passed away with grace and dignity at his home in Lincoln, California on May 10, 2022.

Jerry was born on July 16, 1939, in Powell Wyoming. He graduated from Powell High School in 1957. Jerry played basketball for the Wyoming Cowboys for 2 years before transferring to Westminster College in Salt Lake City on a basketball scholarship, where he was a star on the team.

Jerry moved to Carson City, Nevada, in 1967. He worked at the State of Nevada, Department of Education, until he retired in 1990. He then moved to Arizona where he played lots of golf and enjoyed the desert wildlife that surrounded his home in Carefree, AZ. Finally, he and his wife, Sherry, moved to Northern California where he continued to enjoy his days golfing, cooking, and gardening.

Perhaps, Jerry’s greatest passion in life was golf. He loved the game and the competition, and was out on the course nearly every day either practicing or playing. On the last day of his life, his wife Sherry asked him if he wanted anything and he said, “Yes, I want to make a tee time.”

Jerry was always a teacher. He looked for the lessons in life, and lived his life with conviction and integrity. He could fill a room with his charismatic charm and humor. It was important for Jerry to always be the best version of himself unapologetically. He was loved by many, and those who knew him well will feel the void of his beautiful presence.

Cremation has taken place and his family will have a celebration of life on June 14, 2022 in Northern California.