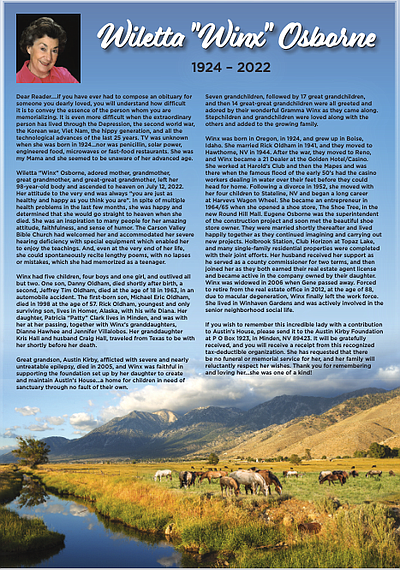 Dear Reader....if you have ever had to compose an obituary for someone you dearly loved, you will understand how difficult it is to convey the essence of the person whom you are
memorializing. It is even more difficult when the extraordinary person has lived through the Depression, the second world war, the Korean war, Viet Nam, the hippy generation, and all the
technological advances of the last 25 years. TV was unknown when she was born in 1924...nor was penicillin, solar power, engineered food, microwaves or fast-food restaurants. She was my Mama and she seemed to be unaware of her advanced age.

Wiletta “Winx” Osborne, adored mother, grandmother, great grandmother, and great-great grandmother, left her 98-year-old body and ascended to heaven on July 12, 2022.
Her attitude to the very end was always “you are just as healthy and happy as you think you are”. In spite of multiple health problems in the last few months, she was happy and
determined that she would go straight to heaven when she died. She was an inspiration to many people for her amazing attitude, faithfulness, and sense of humor. The Carson Valley
Bible Church had welcomed her and accommodated her severe hearing deficiency with special equipment which enabled her to enjoy the teachings. And, even at the very end of her life, she could spontaneously recite lengthy poems, with no lapses or mistakes, which she had memorized as a teenager.

Winx had five children, four boys and one girl, and outlived all but two. One son, Danny Oldham, died shortly after birth, a second, Jeffrey Tim Oldham, died at the age of 18 in 1963, in an automobile accident. The first-born son, Michael Eric Oldham, died in 1998 at the age of 57. Rick Oldham, youngest and only surviving son, lives in Homer, Alaska, with his wife Diana. Her daughter, Patricia “Patty” Clark lives in Minden, and was with her at her passing, together with Winx’s granddaughters, Dianne Hawhee and Jennifer Villalobos. Her granddaughter
Kris Hall and husband Craig Hall, traveled from Texas to be with her shortly before her death.

Great grandson, Austin Kirby, afflicted with severe and nearly untreatable epilepsy, died in 2005, and Winx was faithful in supporting the foundation set up by her daughter to create
and maintain Austin’s House...a home for children in need of sanctuary through no fault of their own.

Winx was born in Oregon, in 1924, and grew up in Boise, Idaho. She married Rick Oldham in 1941, and they moved to Hawthorne, NV in 1944. After the war, they moved to Reno, and Winx became a 21 Dealer at the Golden Hotel/Casino. She worked at Harold’s Club and then the Mapes and was there when the famous flood of the early 50’s had the casino workers dealing in water over their feet before they could head for home. Following a divorce in 1952, she moved with her four children to Stateline, NV and began a long career at Harvevs Wagon Wheel. She became an entrepreneur in 1964/65 when she opened a shoe store, The Shoe Tree, in the new Round Hill Mall. Eugene Osborne was the superintendent of the construction project and soon met the beautiful shoe store owner. They were married shortly thereafter and lived happily together as they continued imagining and carrying out new projects. Holbrook Station, Club Horizon at Topaz Lake, and many single-family residential properties were completed with their joint efforts. Her husband received her support as he served as a county commissioner for two terms, and then joined her as they both earned their real estate agent license and became active in the company owned by their daughter. Winx was widowed in 2006 when Gene passed away. Forced to retire from the real estate office in 2012, at the age of 88, due to macular degeneration, Winx finally left the work force. She lived in Winhaven Gardens and was actively involved in the senior neighborhood social life.

If you wish to remember this incredible lady with a contribution to Austin’s House, please send it to the Austin Kirby Foundation at P O Box 1923, in Minden, NV 89423. It will be gratefully received, and you will receive a receipt from this recognized tax-deductible organization. She has requested that there be no funeral or memorial service for her, and her family will reluctantly respect her wishes. Thank you for remembering and loving her...she was one of a kind!