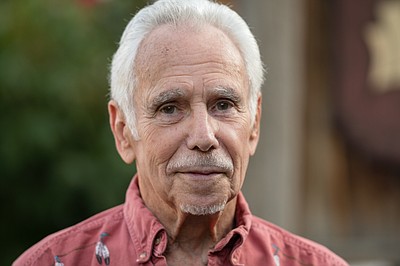 Gary Griffith of Gardnerville, NV passed away on December 14th, 2021, at the age of 85. After a short battle with bladder cancer, he died peacefully at home with his daughters at his side.

Born on July 22, 1936, in Rockville Centre, Long Island, New York, Gary was the youngest of two sons from a military family. He often spoke of a happy childhood and the extensive travels afforded him as the son of a Brigadier General. He attended Catholic School in New York as well as schools in Guam and Japan.

Gary entered the United States Air Force in 1955, serving as an instructor in electronic fundamentals and the Atlas ICBM (Intercontinental Ballistic Missile) Program. He attended numerous technical security schools and would go on to become a Special Agent with the Office of Special Investigations (OSI), the Air Force counterintelligence service. His location assignments included Omaha and Washington, DC, as well as overseas in Japan and Vietnam. He also had numerous temporary assignments throughout the world, participating in the Protective Services Operations, and technical support to Counterintelligence and Criminal Investigations. His awards included the Missile Badge, Meritorious Service Medal, AF Commendation Medal and Bronze Star Medal.

After retiring from the USAF in 1975, he took a position with Lockheed Missiles and Space Company, eventually creating and managing the company’s first Security Services Department, comprised of the Investigation Bureau, Classification Management, Technical Security, the Computer Security Analysis Group, and Security Training.

Gary moved to Gardnerville, NV in 1992, after retiring from Lockheed. He became very involved in various animal right’s issues, including advocating for the humane treatment of Nevada’s wild horses. Along with his beloved, Barbara Smith, he operated a nonprofit organization, called Amigos De Los Gatos Foundation, dedicated to the prevention of cruelty to animals. Gary was also very involved with the local community and was instrumental in campaigning for PEV (Protect East Valley), an organization that was successful in preventing the building of a gravel pit in the area. He also was a frequent patron at Carson Valley Inn, where he enjoyed playing Blackjack and socializing with his friends.

Gary was a loving father, grandfather, and great grandfather. A man of great wisdom, he had a very philosophical way of looking at life, and one always felt better and more enlightened after a conversation with him. He will be deeply missed by his family, who are blessed to have had him in their lives and are extremely proud of the remarkable life that he led and the legacy that he leaves behind.

A local celebration of life will be announced soon, followed by a private memorial at Arlington Cemetery this summer.