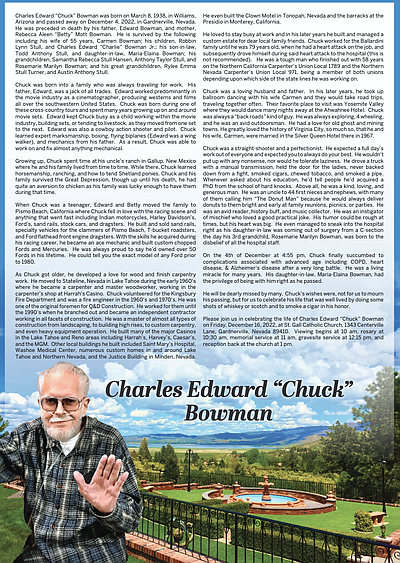 Charles Edward “Chuck” Bowman was born on March 8, 1938, in Williams, Arizona and passed away on December 4, 2022, in Gardnerville, Nevada. He was preceded in death by his father, Edward Bowman, and mother, Rebecca Aleen “Betty” Mott Bowman. He is survived by the following including his wife of 55 years, Carmen Bowman; his children, Robbin Lynn Stull, and Charles Edward “Charlie” Bowman Jr.; his son-in-law, Todd Anthony Stull, and daughter-in-law, Maria-Elaina Bowman; his grandchildren, Samantha Rebecca Stull Hansen, Anthony Taylor Stull, and Rosemarie Marilyn Bowman; and his great grandchildren, Rylee Emma
Stull Turner, and Austin Anthony Stull.

Chuck was born into a family who was always traveling for work. His father, Edward, was a jack of all trades. Edward worked predominantly in the movie industry as a cinematographer, producing westerns and films all over the southwestern United States. Chuck was born during one of these cross-country tours and spent many years growing up on and around movie sets. Edward kept Chuck busy as a child working within the movie industry, building sets, or tending to livestock, as they moved from one set to the next. Edward was also a cowboy action shooter and pilot. Chuck learned expert marksmanship, boxing, flying biplanes (Edward was a wing walker), and mechanics from his father. As a result, Chuck was able to work on and fix almost anything mechanical.

Growing up, Chuck spent time at his uncle’s ranch in Gallup, New Mexico where he and his family lived from time to time. While there, Chuck learned horsemanship, ranching, and how to tend Shetland ponies. Chuck and his family survived the Great Depression, though up until his death, he had quite an aversion to chicken as his family was lucky enough to have them
during that time.

When Chuck was a teenager, Edward and Betty moved the family to Pismo Beach, California where Chuck fell in love with the racing scene and anything that went fast including Indian motorcycles, Harley Davidson’s, Ford’s, sand rails, stock cars, and dragsters. He built and sold sand rails, specialty vehicles for the clammers of Pismo Beach, T-bucket roadsters,
and Ford flathead front engine dragsters. With the skills he acquired during his racing career, he became an ace mechanic and built custom chopped Fords and Mercuries. He was always proud to say he’d owned over 50 Fords in his lifetime. He could tell you the exact model of any Ford prior to 1980.

As Chuck got older, he developed a love for wood and finish carpentry work. He moved to Stateline, Nevada in Lake Tahoe during the early 1960’s where he became a carpenter and master woodworker, working in the carpenter’s shop at Harrah’s Casino. Chuck volunteered for the Kingsbury Fire Department and was a fire engineer in the 1960’s and 1970’s. He was
one of the original foremen for Q&D Construction. He worked for them until the 1990’s when he branched out and became an independent contractor working in all facets of construction. He was a master of almost all types of construction from landscaping, to building high rises, to custom carpentry, and even heavy equipment operation. He built many of the major Casinos in the Lake Tahoe and Reno areas including Harrah’s, Harvey’s, Caesar’s, and the MGM. Other local buildings he built included Saint Mary’s Hospital, Washoe Medical Center, numerous custom homes in and around Lake Tahoe and Northern Nevada, and the Justice Building in Minden, Nevada. He even built the Clown Motel in Tonopah, Nevada and the barracks at the Presidio in Monterey, California.

He loved to stay busy at work and in his later years he built and managed a custom estate for dear local family friends. Chuck worked for the Ballardini family until he was 79 years old, when he had a heart attack on the job, and subsequently drove himself during said heart attack to the hospital (this is not recommended). He was a tough man who finished out with 58 years on the Northern California Carpenter’s Union Local 1789 and the Northern Nevada Carpenter’s Union Local 971, being a member of both unions depending upon which side of the state lines he was working on.

Chuck was a loving husband and father. In his later years, he took up ballroom dancing with his wife Carmen and they would take road trips, traveling together often. Their favorite place to visit was Yosemite Valley where they would dance many nights away at the Ahwahnee Hotel. Chuck was always a “back roads” kind of guy. He was always exploring, 4 wheeling,
and he was an avid outdoorsman. He had a love for old ghost and mining towns. He greatly loved the history of Virginia City, so much so, that he and his wife, Carmen, were married in the Silver Queen Hotel there in 1967.

Chuck was a straight-shooter and a perfectionist. He expected a full day’s work out of everyone and expected you to always do your best. He wouldn’t put up with any nonsense, nor would he tolerate laziness. He drove a truck with a manual transmission, held the door for the ladies, never backed down from a fight, smoked cigars, chewed tobacco, and smoked a pipe. Whenever asked about his education, he’d tell people he’d acquired a PhD from the school of hard knocks. Above all, he was a kind, loving, and generous man. He was an uncle to 44 first nieces and nephews, with many of them calling him “The Donut Man” because he would always deliver donuts to them bright and early at family reunions, picnics, or parties. He was an avid reader, history buff, and music collector. He was an instigator of mischief who loved a good practical joke. His humor could be rough at times, but his heart was big. He even managed to sneak into the hospital right as his daughter-in-law was coming out of surgery from a C-section the day his 3rd grandchild, Rosemarie Marilyn Bowman, was born to the
disbelief of all the hospital staff.

On the 4th of December at 4:55 pm, Chuck finally succumbed to complications associated with advanced age including COPD, heart disease, & Alzheimer’s disease after a very long battle. He was a living miracle for many years. His daughter-in-law, Maria-Elaina Bowman, had
the privilege of being with him right as he passed.

He will be dearly missed by many. Chuck’s wishes were, not for us to mourn his passing, but for us to celebrate his life that was well lived by doing some shots of whiskey or scotch and to smoke a cigar in his honor.