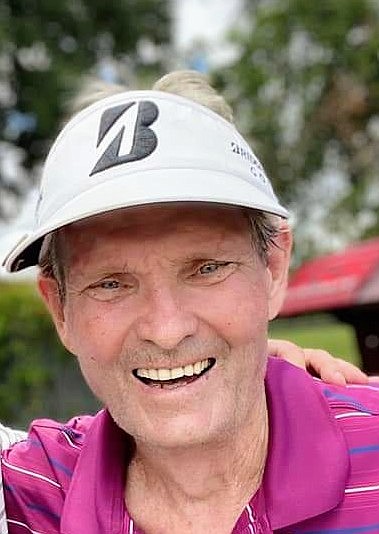 Ken was born on February 12, 1944, in Bowman, ND to Ted and Mary West where he grew up with his eight siblings getting in a lot of mischievous trouble, frankly, it’s amazing they all survived into adulthood and their parents survived it all too. Upon graduating Bowman High School, he would later enter the U.S. Army and serve during the Vietnam War. After he was honorably discharged, he moved to South Lake Tahoe, CA where he would begin his lifelong career in the casino industry. While his career moved him all over the country, much of his adult life was spent in South Lake Tahoe, Las Vegas, and the Biloxi area.

Ken was an avid golfer, a PGA Qualifier Candidate, and a volunteer coach for St. Patrick’s High School team in Biloxi from 2010-2014 helping lead them to State Championships. He always loved the kids calling him “Coach” and earned plenty of respect because no one could beat him. One of the highlights in his life was being able to play the Augusta National Golf Club with his brother.

Kenny, as his friends called him, was a very personable guy with an excellent sense of humor and a knack for telling dirty jokes. He made lifelong friends everywhere he went and fancied himself quite the “Ladies Man.” If he wasn’t on the golf course, you could find him tinkering around the garage or yard. Other times he’d be watching Golf, the news or Antique Roadshow. He loved Corvettes, The Eagles, Smooth Jazz and insisted on an In-n-Out burger every time he came to the West Coast.

He was always there to help a neighbor or stranger. He would do the smallest of kind gestures daily whether it be returning someone’s shopping cart for them, holding the door open or just a friendly smile for a stranger and asking how they were doing.

In the last couple of years Ken suffered from Alzheimer’s/ Dementia and re-located from Mississippi to Nevada, where his daughter, Jennifer, became his primary caregiver. His death came suddenly with Jennifer and her husband, Dan, by his bedside. He is predeceased by his parents, his son Dennis, brothers Jerry and Russell, sisters Mary Lavonne, Janice and Cindy, as well as twin great grandchildren.

He is survived by his daughters Jennifer (Dan), Wanda, Grandchildren – Mason, Cassandra, Dustin and Amanda, 5 great grandchildren, his close nephew and buddy Wade, Brothers Tyrone, Ron, and Clifford and numerous nieces and nephews.

A headstone will be placed in his hometown of Bowman, ND and another at the Veteran’s National Cemetery in Biloxi, MS.

In lieu of flowers we request that you donate to the Alzheimer’s Association and/or Carson Valley Youth Golf Scholarship program. Contact Dan D’Angelo 775-265-3181, email dan@carsonvalleygolf.com