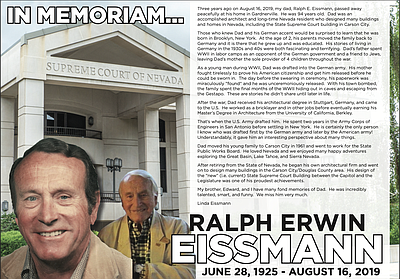 Three years ago on August 16, 2019, my dad, Ralph E. Eissmann, passed away peacefully at his home in Gardnerville. He was 94 years old. Dad was an accomplished architect and long-time Nevada resident who designed many buildings and homes in Nevada, including the State Supreme Court building in Carson City.

Those who knew Dad and his German accent would be surprised to learn that he was born in Brooklyn, New York. At the age of 2, his parents moved the family back to Germany and it is there that he grew up and was educated. His stories of living in Germany in the 1930s and 40s were both fascinating and terrifying. Dad’s father spent WWII in labor camps as an opponent of the German government and a friend to Jews, leaving Dad’s mother the sole provider of 4 children throughout the war.

As a young man during WWII, Dad was drafted into the German army. His mother fought tirelessly to prove his American citizenship and get him released before he could be sworn in. The day before the swearing in ceremony, his paperwork was miraculously “found” and he was unceremoniously released. With his town bombed, the family spent the final months of the WWII hiding out in caves and escaping from the Gestapo. These are stories he didn’t share until later in life.

After the war, Dad received his architectural degree in Stuttgart, Germany, and came to the U.S. He worked as a bricklayer and in other jobs before eventually earning his Master’s Degree in Architecture from the University of California, Berkley.

That’s when the U.S. Army drafted him. He spent two years in the Army Corps of Engineers in San Antonio before settling in New York. He is certainly the only person I know who was drafted first by the German army and later by the American army! Understandably, it gave him an interesting perspective about many things.

Dad moved his young family to Carson City in 1961 and went to work for the State Public Works Board. He loved Nevada and we enjoyed many happy adventures exploring the Great Basin, Lake Tahoe, and Sierra Nevada.

After retiring from the State of Nevada, he began his own architectural firm and went on to design many buildings in the Carson City/Douglas County area. His design of the “new” (i.e. current) State Supreme Court Building between the Capitol and the Legislature was one of his proudest achievements.

My brother, Edward, and I have many fond memories of Dad. He was incredibly talented, smart, and funny. We miss him very much.