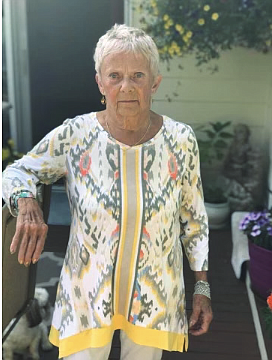 Geraldine Stern (Gerry), age 79, died suddenly on August 1 while traveling. Gerry had been a resident of Gardnerville, Nevada since 2013.

Gerry was born December 30, 1942 in Noblesville, Indiana to John and Martha Stern. She attended local Noblesville schools and then attended and graduated from Purdue University after majoring in philosophy and math.

In 1977, she moved to Alaska with her husband Edward Arobio. They lived near Fairbanks for the next 35 years. While in Alaska, Gerry had several jobs. Her first position was as a water resource manager for the State of Alaska. This was followed by assisting with food safety research projects at the University of Alaska, and then as an office assistant for the local Congressional Office.

She also enjoyed working for Nordstrom during the Christmas season. However, the main focus for her last 20 years in Alaska was raising and racing championship sprint sled dogs. She excelled at this activity and won many races. Gerry raced in local, state and world championships.

After moving to Gardnerville, Gerry became involved in the art of ceramic painting, as well as photographing Carson Valley agriculture. She also never lost her love of shopping, particularly for art, jewelry and fashion. She was a devoted Cub and Packers fan.

Per Gerry’s request, her ashes will be taken to Alaska in time for the spring Championship sled dog races.