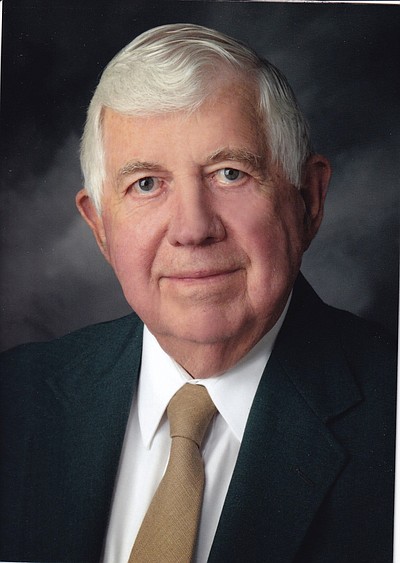 Bob died after a long illness surrounded by family and friends on the beautiful spring afternoon of April 1,2022 Bob was born on July 25, 1931, in Lockport, N.Y., to parents
Charles S. and Eleanor S. Allgeier.

He grew up in Depew, N.Y., a small town just outside Buffalo, N.Y. He had one sister, Mary Lou. He graduated from Depew High School in 1948. During high school he played French horn in the Buffalo Bills football team band. After graduation he attended the New York State Institute of Applied Arts and Sciences, majoring in Industrial Chemistry. In 1949, he transferred to Cleveland State University Fenn Collage in Cleveland, Ohio, graduating in 1954 with a bachelor of Science Degree in Chemical Engineering.

He married Donna Lou Neil in December 1953 in Buffalo, N.Y. They had three children, Michael, Sharon, and Grant. Bob and Donna moved from Cleveland, Ohio to the San
Gabriel Valley in California in 1957. They lived for many years in Covina, Calif. He had a long business career working initially for U.S. Steel while attending college, Lee Wilson Engineering Co. in Rocky River, Ohio, C. F. Braun in Alhambra, Calif., Pacific Scientific Company in Bell Gardens, Calif. He joined with Egloff and Graper Inc. in Santa Fe Springs, Calif., in 1972. The firm specialized in the design, manufacture and servicing of industrial furnace equipment
employed in the heat treatment of most metals. Bob and his partner, John Thatcher, purchased controlling interest in Egloff and Graper in 1978 and actively ran the business
until they sold it in 1985. At the time of sale, Bob was the president and CEO.

Bob was active in many, many community affairs. He was an active Republican helping found the Covina Republican Club. He served four years as an elected School Trustee in the Rowland School District. He was active in Cub Scout and Boy Scout affairs. He was an Eagle Scout in his youth. He was an avid sportsman. He loved bird hunting and saltwater fishing. He was president of the San Gabriel Valley Gun Club in Duarte, Calif. He served as chairman of the Rio Hondo Ducks Unlimited Chapter in Montebello, Calif. He spent much time in Mexico with his hunting and fishing buddies. He was fortunate to have fished in the Sea of Cortez before the onset of a declining fish harvest His avocation was shotgun shooting. He was an avid trap and skeet shooter. He was a member for years in the Amateur Trap Association. He regularly participated in registered shoots. He was a long-time member of the California Indians, a trap and skeet shooting organization, and a past president of the Makaha Indians, a trap shooting organization that annually shot in Hawaii. He was a skilled rifleman.

He was an avid duplicate bridge player. His partner in this activity for the many years was Fran Coursey. He had a great love for dogs and poker. One of his favorite comments is that he liked dogs better than he liked most people. His love for 31 years was the Tahoe-Douglas Elks Lodge No. 2670. He served this organization for many years as Secretary and then Treasurer. He was elected by the lodge for Honorary Life Membership and was selected as Elk of the Year 2006-2001. He loved good music, good books, his good friends, and the few good persons that he highly respected.

He is survived by his wife Donna of 69 years. His children Michael, Sharon, and Grant; grandchildren Tom, Elizabeth, Bea and Tiffany, and great grandchildren Madalyn, Bryanna,
Mia, Jayden and Michael and several nieces’ nephews. Bob donated his body to the UNR school of Medicine.

A Celebration of life service and potluck will be held at 1lAM Saturday, May 7,2022 at the Tahoe Douglas Elks Lodge #267A,1227 Kimmerling Rd. Gardnerville NV.

If you wish to make a donation in Bobs name, he would like it made To DAWG or To the Carson Valley Historical Society.