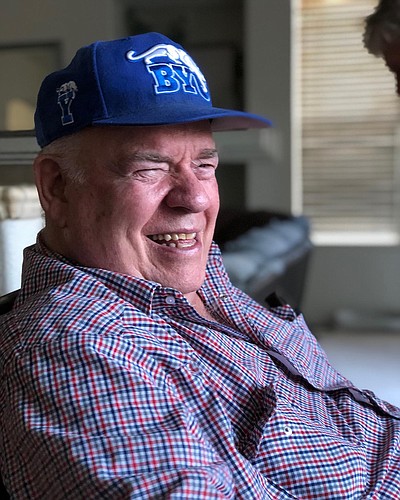 Perry Leon Davis, age 79, passed to the other side Thursday, April 7, after a battle with stage 4 kidney cancer. He departed with love and was welcomed with love, comfortably and peacefully in the house he built with his own hands, surrounded by the family he loved and cherished.

He was born in Bell, Calif. on June 17, 1942, as the second son of five children to Segal Otis Davis and Norma Lucille Hiatt Davis. He graduated Bell High School winter of 1960, and later earned a scholarship to Los Angeles Trade Technical College where he pole-vaulted and ran track and had an academic emphasis in sheet metal.

In 1964, he established his first business Cudahy Plywood & Lumber in Cudahy, Calif. Additionally that year, he enlisted in the Army Reserves and served at Fort Ord, in Monterey Bay, Calif. He married the love of his life, Carol Amdal, Aug. 20, 1966, in Glendale, Calif. and supported her through college at California State University, Los Angeles. As his lumber and plywood business continued to prosper, he later enlisted with the United States Air Force as a reserve and served at March Air Force Base in Riverside, Calif. He was honorably discharged Aug. 8, 1970.

In 1971, he relocated his wife and 1-year-old son, Steven, to Carson City where he built and established City Plywood & Lumber, Inc. The couple later welcomed four more children, Laurel, Daniel, Kristin and Valerie.
Perry was an avid sportsman and hunted and fished throughout Nevada and many of the western states. He was a stranger to no one. His persona, much like his stature, filled an entire room. His hysterical sense of humor, loving acceptance of others and loyal friendship made anyone he met not only a friend, but also a member of his family. He was generous to a fault, and his family is still learning of countless times he provided food or financial assistance, unbeknownst to anyone except the receiving parties.

He was a carpenter and craftsman of his trade. He loved building things. His talent spanned from large industrial buildings and homes to ornate pieces of furniture, many of which were branded with his signature. Memories of him and laughter will forever reverberate in the countless sayings and aphorisms shared among those who knew, trusted, and loved him.
Perry is survived by his wife Carol Davis, his five children and their spouses (Steve and Melanie Davis, Laurel and Dan Crossman, Dan and Janie Davis, Kristin and Matt Wallace and Valerie and Rob Howey), his
24 grandchildren and one great grandchild and countless others.

In lieu of flowers, donations may be made to support his grandchildren to serve full-time missions for the Church of Jesus Christ of Latter-day Saints.