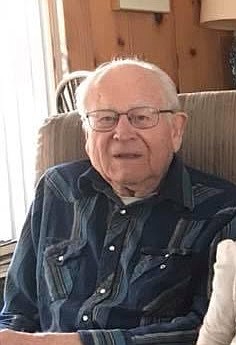 Louis enlisted in the Army Reserve Corp in 1943 at the age of 17. He was called to active duty shortly after turning 18. He served in Germany during WWII until his father’s death when he returned home. Louis then reenlisted and was stationed in Eritrea, Africa as a motor sergeant, where he learned to speak Italian while working alongside the mechanics from Italy. After almost 3 years, he was then sent to serve in the Korean War for 9 months and was honorably discharged.

Louis had many careers during his lifetime, including owner of Sierra Sales and Service in June Lake, CA, rancher in Smith Valley, NV, and a mechanic for Harrah’s Auto Collection. His passion was repairing and restoring vintage Fords and he was known as a collector of vintage Ford parts. Up until his 80’s, he drove across the country delivering or buying Ford parts. Louis had a great sense of humor, loved history, and enjoyed learning new things. His family was so proud of him when he graduated from Western Nevada College in his eighties with an Associate Degree!

Funeral services with military honors will be held on May 6, 2022, at 9:00 am at the Northern Nevada Veterans Memorial Cemetery in Fernley, NV. A reception will follow at Black Bear Diner in Fernley, Nevada.