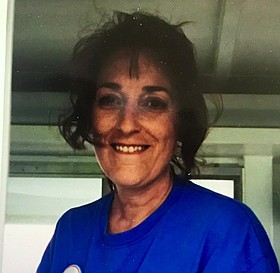 Phyllis Lynn Furlong was born on November 30, 1956, in Osceola, Arkansas, the first child of Franklin “Dee” and Joann Shoemaker. At the age of 6 years, her father took a position at the Carson City Meeks Lumber yard and moved his family across the country. Phyllis grew up in Carson and graduated from Carson High School in the summer of 1974. She and her soon-to-be husband, Ken Furlong, met and began dating while in junior high school. Ken graduated the year after Phyllis, and they were married on December 13, 1975, at St. Teresa of Avila’s Catholic Church. On February 13, 1977, Phyllis and Ken were graced with their son,
Kevin, and later, after Ken entered the Air Force, their daughter Kendra, on April 18, 1980.

From 1978 to 1998, Phyllis and the family resided at many military installations, the first of which took the family back to Osceola, Arkansas, where Phyllis was born. As the years went on, in addition to the time spent in Arkansas, they resided in California, Nevada, North Carolina, and in Germany. While her husband was on an unaccompanied tour in Korea, Phyllis brought the kids home to Carson City until Kenny’s return a year later. Phyllis especially enjoyed their time in Goldsboro, North Carolina. There, she found her hidden talent of floral design. Her masterful artistic decorations won over a local flower store owner, and in a
short time, he ceded all management and operations of one of his stores to Phyllis. She thrived in the store and community and often considered North Carolina as a place to retire, yet Ken’s Air Force career would eventually cause the family to move on.

While in Germany, Phyllis visited to as many countries as she could, filling up her passport with entry stamps. She was also intent to live on the German economy, away and disconnected from the U.S. Military installations, just to immerse herself in the foreign culture. Residing far away from the nearest bases, she found joy and adventure in learning and experiencing new ways of life far removed from Nevada, Arkansas, and the U.S. states.

By 1998, Ken was approaching retirement from the Air Force, and Phyllis brought the family home to Carson. She worked for a short time with the Nevada Secretary of State’s Office and then moved to the Nevada Department of Education as a Budget Analyst. She volunteered her time with Carson City’s Court Appointed Special Advocates (CASA) group, was a member of the Carson City Republican Women’s Club and the Carson City Red Hat Society. In 2003, after her husband was elected Sheriff, Phyllis became the department advocate to the Sheriff
for the K-9 program, always advocating for their best interests. She loved the dogs of the unit and especially loved her own pets in the home.

Phyllis was preceded in death by her parents, Franklin and Joann Shoemaker. She is survived by her husband Ken Furlong; son Kevin, daughter-in-law MaryGrace, and grandchildren Katelyn and Kimberly; daughter Kendra and grandsons William “Gage,” Gavin, and Edward “Eddy”; brother Gregory Shoemaker; and sister Melissa Smith.

Celebration of life will be held on Wednesday, September 22, 2021, at 10 a.m. at Walton’s Chapel, Carson City. In lieu of flowers, donations can be made to the Nevada Humane Society.