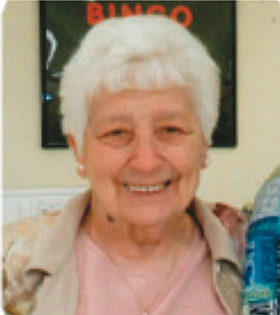 Peggy Leann Black (Anderson) Truttman 95 years old and a 35-year resident of Carson City NV, was taken home by her heavenly Father in the early morning hours of July 13, 2021.

She is preceded in death by her 1st husband, Emanual Robert Anderson (1968), and current husband Patrick Truttman (2000), parents, Rollin and Mary Black of Michigan, Uncle Kenneth, and Aunt Marie Pickering of Mansfield Ohio, who raised Peggy from the age of 7, and
son, Eric Robert Anderson, Burbank, CA.

Peggy, born July 25, 1925, in Bellville, Ohio to parents Rollin and Mary Black, was raised by her Aunt Marie, after the death of her mother, at the age of 7. Peggy was raised in the Lutheran faith until the Lord called her home. After graduating H.S. in 1943 she attended nurse’s training, called Cadet Nurse Corp., at Cleveland City Hospital for psychiatric patients and Cook County Hospital in Chicago for pediatrics. In 1946, Peggy and Bob Anderson were
married and had their 1st child, Linda. In 1948 the family moved to Burbank, CA. where they had 2 more children (Eric Robert & Elizabeth) and lived there until Bob’s sudden death in 1968, at the age of 50. In 1970 Peggy she remarried to long-time family friend Patrick Truttman.

Peggy worked for Lockheed Aircraft, Burbank CA. for 36 years, from 1951 to 1987, as a blueprint trimmer, advancing to Lead in the Microfilm Dept. until she retired in 1987. Both husbands were very active members and Exalted Rulers in the Burbank Elks Lodge and Peggy was very active in both Burbank Emblem Club #86 and Carson City Emblem Club #507 (affiliated with the Elks Lodges) for 60 years. Both Peggy and Patrick decided to retire to
Carson City, Nevada, where they bought a home and enjoyed their many years together until his death in 2000, due to a military related health condition at the age of 74. Peggy continued to live in her home and moved forward continuing her volunteerism with C.C. Emblem club #507 and the DAVA Unit 7 (Disabled American Veterans Aux) and became very active with her church family in the planning, preparation, and organization of food for various events/ receptions etc. She became the “go to” person anytime someone needed advice regarding food. She was always successful in making thousands of phone calls over the years, to get volunteers to help her anytime she needed help, she always had a loving approach. She
always knew how much food, and menu items to serve and volunteers needed, for all occasions and life events.

She performed all these tasks and more due to her love of God, family, community, and volunteerism. She always considered herself extremely blessed to have such wonderful friends and family!

In memory of Peggy Truttman, donations may be made to the Disabled American Veterans, Chapter 7 C. C. NV., or to C. C. Emblem Club #507 memo: Nursing Scholarship or to St Paul’s Lutheran Family memo: Sunday School/VBS ONLY.