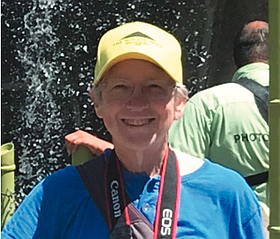 Kathleen Ann (Konkol) Delorey passed away at home in Gardnerville, Nevada on September 2nd, 2021 surrounded by her loving family following a protracted battle with pancreatic cancer.

Kathy was born on February 8th, 1948 in Holyoke, Massachusetts to Charles and Margaret Konkol. Soon thereafter Charles moved his small family to Worcester in central Massachusetts where Kathy grew up and attended school before returning to Western Massachusetts. There she attended the College of Our Lady of the Elms in Chicopee, graduating in June of 1970.

She briefly attended Officer Candidate School for the United States Marine Corps before deciding it wasn’t for her and became a teacher. Soon thereafter, she met her future husband Dan Delorey and ended up living that Navy life anyway by marrying the submarine sailor in
February of 1973. Two years later she welcomed their son William. She spent the next ten years bouncing around New England and the United Kingdom raising Bill while Dan was at sea. She would always treasure the time they lived in Dunoon, Scotland and it would influence her for the rest of her life.

Once Dan was discharged from service they moved to Stateline, Nevada where they lived for the next twenty years. Kathy took on the mantle of a banker and was well known in the community for her work with Nevada Banking Company and First Interstate Bank followed
by Wells Fargo after FIB was absorbed. She was also very active in the church community of Our Lady of Tahoe as music director and teacher to many youth throughout the 80s and 90s.

In the early 2000s they moved to Saint Gaul’s parish in Gardnerville where Kathy was the musical director, among other various responsibilities. Music was always a huge part of Kathy’s life. She loved to play guitar and brought her enthusiasm to countless people over the years.

In 2016 following her diagnosis with pancreatic cancer and retirement, Kathy and Dan moved to Gardnerville where she spent the rest of her life.

Kathy is survived by Daniel, her husband of 48 years. Her son William and daughter in law Jennifer of San Diego. Her son never provided her with grandchildren, but that didn’t deter her, so she has become a foster grandmother to her niece Kathryn’s family and is survived by Evan, Zara and Barrett Satre of San Diego.