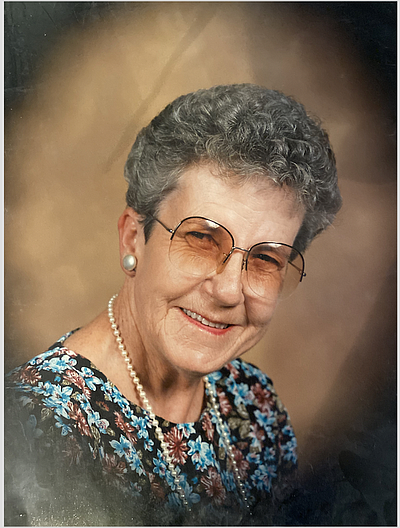 Thelma was born on July 12, 1930, in Gardnerville, NV. She graduated from Douglas County High School, and the Haz-More School of Dress - San Francisco CA. On May 5, 1956 she married Robert Johnson. They raised three children. His career took them to Sacramento CA, Pasadena CA, Fair Oaks CA, Phoenix AZ, Miami FL, Germany, and Clovis NM. Thelma returned to Reno NV in 1979 to be closer to family, and the valley and mountains she loved so much, and always reminisced about.

Thelma participated in 4-H as a child, and told many grand stories about raising sheep, and life on the ranch in Jack’s Valley. She became a sewing and cooking 4-H leader in her adult years. Her former husband’s military career fulfilled Thelma’s desire to travel, taking her across the United States and Europe. Thelma truly enjoyed her time in Europe, touring castles, attending Oktoberfest, and immersing herself in the land and culture of her ancestors.

Thelma had a passion for gardening. No matter where she lived. She turned her home into
opulent horticultural environments. Even if she was limited to her condo patio, or only a
windowsill, she always filled her space with plants. She enjoyed harvesting and preserving
her vegetables and sold her overabundance of cherry tomatoes from her front yard. Thelma was active in her neighborhoods and communities, and participated with enthusiasm
and determination. Her spirit will not be forgotten.

Thelma was preceded in death by her grandparents Diedrich and Marie (Wehrmann)
Winkelmann, Christian “Fritz” and Anna (Dreyer) Neddenriep, her parents, Ewald and
Frieda (Neddenriep) Winkelman, and her brother Clifford Winkelman.

Thelma will be laid to rest at Sierra Memorial Gardens, Reno NV