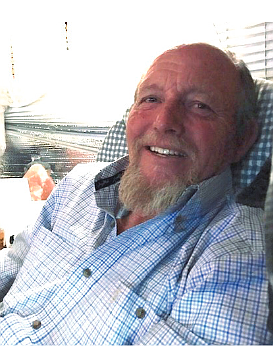 With broken hearts we said our last goodbye to our son, brother and friend. Jim left the bonds of earth for the golden streets of Heaven on Sept. 24, 2021. He fought a courageous, valiant fight with cancer. In the end, the cancer didn’t win, it died with him.

Born in Apple Valley, CA. He grew up enjoying the expansiveness of the open high desert with lifelong friends Doug Warren and Barry Johnson. As desert life changed, he moved onto Utah, Northern California and eventually settled in Dayton, NV.

Jim followed in his dad’s footsteps into the pipeline industry. He worked many decades installing gas pipelines in Ca., AZ., Utah and Nevada. His years of experience and knowledge led him to become a gas pipeline inspector. Employed by QIS Inspections and most recently by C and L Inspections. He inspected gas pipelines in all of Northern and Southern Nevada. Pipeline work was in his blood; he enjoyed all aspects of it, along with the many wonderful friends he made along the way.

James, Jim, Jimmy was son to Sondra Rowe of Perry, Ok., Boyfriend to Sylvia Tavarez of Dayton, NV. Best brother to Tammy Platt of Gardnerville, NV. Brother in law to Craig Platt. Father to James Rowe lll of CA and Sondraya Rowe of CO. Former husband to Sharon Rowe
of CA and father to her children, Mark Lewis, Michael Lewis and Stacy Hagberg. Uncle to Larissa Tersteege and Brielyn Dominguez. Jim is survived and loved by many aunts, uncles, cousins and friends.

He was preceded in death by his father Jim Rowe Sr., wife Leah Rowe and nephew Christopher Platt.

Per his request there will be no services. If you knew Jim he would want you to raise a cold Corona or mocha frappe to celebrate his life, not his death.