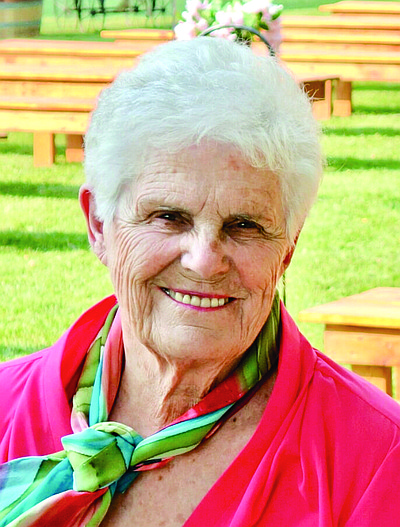 Margery Lou (Titus) Scott passed away peacefully on November 25th, 2021 at the age of 88.
She was born in Reno on September 28th, 1933 to Louis Titus and Eva Minetto Titus.

She grew up on the family farm on Mill Street. She attended Reno High School where she was active in GAA, Girl’s State, Commissioner of Girl’s Athletics, Basketball, Huskie-ettes, Huskie Haven and Re-Wa-Ne. She attended the University of Nevada, Reno, graduating in 1955 with a degree in Physical Education. During college, Margery was a member of Delta, Delta, Delta sorority, Chairman of Hello-on-the-Hill, Women’s Upperclass Committee, Student Union Committee, Cap and Scroll, Sagens, Physical Education Majors, Women’s Recreation Association, Ski Club, Young Republicans and Leadership Conference. She began her teaching career at Reno High School as a student teacher and later taught in Fallon, NV. She continued her teaching career at California State University, Chico.

Margery married Robert J. Scott on June 18th, 1961 in Reno. They were married for 55 years until he passed in 2016. They moved from Reno to Winnemucca in 1971 and then to Carson City in 1987 where they remained. Margie enjoyed spending time at her “cabin” in Eagleville,
CA. She enjoyed skiing, golf, waterskiing, canoeing, hunting, fishing, camping, cooking, stained glass, the stock market, swimming, and watching her children and grandchildren participate in sports.

To say Marge was full of energy is an understatement. Marge loved planning and holding social events with family and friends. Bike Club, canoeing down the Colorado River, large camping trips, visiting the ranch and being a member of St. Teresa of Avila Women’s Society
were just a few of her activities. She was a die-hard member of “the Ladies of the Lake” which included friends she had since she was a girl. Through her life, she was a teacher, a newspaper reporter, a recreation director, stock broker and a loving mother, grandmother and
great-grandmother. She also coached girl’s basketball, golf, softball, gymnastics, and volleyball. Marge had an unequaled sense of right and wrong, was honest, direct,
loyal to a fault, and very generous.

She greatly enjoyed holidays with family and friends. Margie was also famous for her lime Jell-O, cottage cheese, shredded carrot and walnut salad, which was enjoyed by few. She wrote entertaining and detailed Valentine’s Day letters each year which she sent to numerous friends and relatives. Many of us looked forward to receiving her Valentine’s letter each year with the included personal stories of family and friends in old Reno, Winnemucca, or rural Nevada.

A celebration of life is planned for Saturday, December 11, 2021 at Glen Eagles in Carson City
from 12:00 pm - 3:00 pm. Please join us in a toast to Margie with a Wisconsin Old-Fashioned on Saturday whether you can join us or not