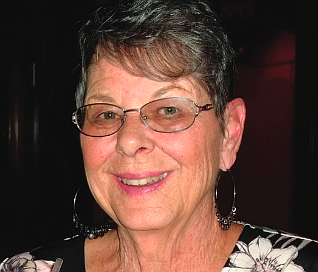 Evelyn “Jo” Van Poperin passed away peacefully on October 23, 2021 in Fallon, NV with her husband and daughter at her side following a sudden cardiac episode.

Jo was the youngest of three children and born on April 23, 1946 to John and Evelyn Moravec. She grew up in St. Paul, MN where she met and married her husband of nearly 55 years, Henry (Hank) Van Poperin. You would be hard pressed to find someone who knew just Jo or just Hank because their lives were so intertwined for so long.

Jo's adventurous spirit emerged and developed as she and Hank moved around the Midwest in their early years together. They settled for a time in Keokuk, IA where their daughter Amy was born. After a bit more Midwest wandering, Jo and Hank returned to Minnesota where they raised Amy, spent time with family, and formed many lifelong friendships, first in St. Paul and then in Winona. Upon retirement, Jo and Hank joined Amy and her husband in Nevada. Jo loved spending time with her grandson, Henry, in Tonopah and later in Fallon where she and Hank most recently lived.

Jo had many jobs over the years, but she most enjoyed spending time around the house preparing meals, sewing, decorating, baking, gardening, and working on projects with her family. She also liked playing cards and going out for a good meal.

Jo always loved travelling to see new and beautiful places. Whether a short day trip or extended vacation, she looked forward to adventure and meeting new people. She enjoyed a drive along the river to look at the fall colors as much as she liked camping in the Canadian Rockies, exploring Nevada, the wild Oregon coast or visiting Mexico and Botswana. Her favorite places were often around water and trees.

People found Jo easy to talk to. It was remarkable how much she could learn about someone she had just met. She enjoyed big family gatherings and parties, as well as coffee with a friend.

Jo liked organizing and planning. For her, the anticipation of a trip was part of the journey. She liked having things in their place and always left home with the dishes washed and the laundry folded.

Jo always reached for what she wanted. She was not afraid to ask and not shy to push when she thought something was not right. She was self-determined, but welcomed encouragement. In true form, she faced her bout with breast cancer head-on and won.

A Celebration of Life will be held on Saturday November 6, at 10AM, at the Christian Life Center in Fallon, NV.

Burial will be at a later date at Northern Nevada Veterans Memorial Cemetery in Fernley, NV.

Cards can be sent to PO Box 5892, Fallon, NV 89407. Donations in Jo’s honor can be made to her favorite charity, St. Jude Children’s Research Hospital.