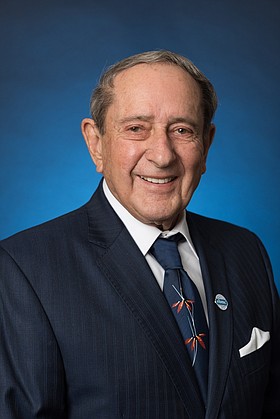 Eugene James Burger, born to Eugene Nolan Burger and Angeline Jean Ambrose on October 21st, 1933 in Butte Valley, California, died February 18th, 2021 at the age of 87 in his home in Gardnerville, Nevada. Diagnosed with COVID-19 in late December, he was admitted to Carson Tahoe Regional Medical Center in early January where he was treated and released several weeks later into care of hospice. The remaining weeks of his life saw him attended closely by his wife, children, and grandchildren.

Eugene, known as Gene to his friends and family, was known as a man of true character: a loving husband married to his wife Shirley for over 60 years. His family of four children (Vicki, Stephen, Kristi, and Tedi) would each rely on his steadfast love and generosity
throughout their lives as they grew into adulthood and raised families of their own. Gene was blessed with 9 grandchildren (Thomas, Angie, Jennifer, Danielle, Justin, James, Kayla, Kacy, and Jo) and 12 great-grandchildren (Gage, Vince, Dylan, Teagan, Elijah, Caylen, Amerabelle, Myles, Lex, Remi, Everett, and Elise) and one greatgreat-grandchild (Ashlyn). As patriarch of the Burger family, his passing will leave a hard-felt void.

He will also be missed by One Fine Dude; his Arabian horse that lives on the property in Gardnerville in an impressive barn Gene built to keep touch with his childhood memories. When he was a boy living in Butte County, California, Gene got his first horse from a rancher north of Chico on old 99. To everyone’s surprise, the horse had never been ridden and was a handful to tame. Rather than simply give up, Gene managed to drive the horse into a corral and was eventually successful at riding the horse all over the ranch and adjacent areas. Soon after, Gene was galloping down dirt roads to pick up mail dropped off by train and bringing news of the world back to his family. It was the tenacious character he demonstrated as a boy that helped foster his appreciation for challenging hard work and it would be this particular asset he would come to rely
on for the rest of his life.

In 1968, Eugene entered into the business of residential and commercial property management by founding Barcelon-Burger Management Corporation (BBMC) with his partner Theodore Barcelon. He and his partner separated in 1979, with Eugene retaining
the original charter for the corporation which he renamed Eugene Burger Management Corporation (EBMC). Under his tenacious leadership, EBMC would become a successful business, growing over the years to employ over 300 people throughout California and Nevada and several other states. For over 50 years Eugene continued his active
leadership in EBMC as Chairman and CEO, with his son Stephen Burger serving as President, daughter-in-law Lori Burger serving as Senior Vice President, and numerous other family members who served in key roles over the years.

As a prominent leader in the property management industry, Eugene was actively involved at the national level as member of the Institute of Real Estate Management (IREM). He served in IREM’s San Francisco Chapter as President in 1974, National President in
1981, and continued to serve the organization for four more decades by participating the Federal Housing Advisory Board, Legislative and Public Policy Committee, and the IREM Foundation Board of Directors. During his time in IREM he generously fostered the growth of future industry leaders as an instructor and by helping to mentor an innumerable number of professionals in the industry. In recognition of his commitment to the advancement of professional education in the real estate management industry he received both the J. Wallace Paletou Award and the Lloyd D. Hanford Sr. Distinguished Faculty Award.

In 2003, Eugene acquired Carson Lanes in Carson City, Nevada, a bowling alley which he sought to modernize and create a familyoriented community entertainment center by renovating the property and incorporating several new businesses to Carson City including Johnny Rockets and Wally’s Pizza.

Throughout his adult life Gene interacted with people from all walks of life and treated them with dignity and respect that most could see was a genuine desire to connect with them on a personal level. He initiated business ventures with numerous partners and contributed personal time in organizations such as the Boys & Girls Club and the Shepherd of the Hills Lutheran Church.

If Eugene’s family was a building, he was the foundation, the walls, and the roof.

Eugene you will be missed greatly.

Eugene was laid to rest on March 1st, 2021 at the Santa Rosa Memorial Park in Santa Rosa, California. In lieu of flowers, the family is asking for donations in honor of Eugene J. Burger to the Boys & Girls Clubs of Western Nevada or the IREM Foundation.