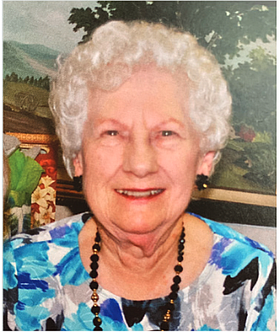 Peggy was born in Crawford, Georgia January 12, 1923 daughter of Groves Howard and Katherine Little Howard and was baptized at Crawford Babtist Church in 1934. Peggy graduated from Crawford High School and the University of Georgia and went to work teaching elementary school in Oakridge, Tennessee where she met her first husband Carl Replogle Jr. of Piedmont, California. Carl and Peggy had three children; C. Howard Replogle, Richter A. Replogle and Katherine Replogle and settled in Piedmont, California where she was active in the PTA and was a volunteer leader for the Cub Scouts.

In the early seventies Peggy returned to Crawford and married childhood friend Jere Blanchard. Peggy was active in the Crawford Baptist Church and was the president of the Crawford Women’s Club. Peggy had many lifelong friends on both coasts and cherished the monthly meetings of her supper club of which she was the last survivor.

After Jere passed, Peggy settled into Merrill Gardens in Gardnerville, Nevada to be near her daughter Katherine and her husband Roger Pierce. At Merrill Gardens Peggy served as the official greeter for new residents and made many new friends.

Unfortunately, the longer one lives the more of their friends and contemporaries move on and Peggy was preceded in death by her parents, her step-brothers and many friends, too many to list. She would often comment on how many of her friends had passed on. She would say that she was still kicking, not very high but still kicking.

Peggy was a southern Lady who never stopped loving and growing and whose horizon continued to grow her entire life. She will be missed by all who knew her.

Memorial service and interment plans are complicated by the pandemic and are, as yet, unannounced.