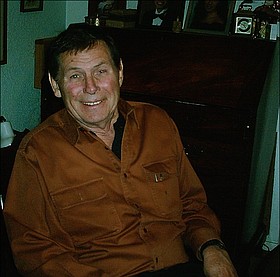 William “Bil” Luckey, loving father and grandfather, passed away peacefully on January 22, 2018. He was 83 years old.

Bil was a Hollywood property master and professional actor for film and television who shared his artistry, humor, and sense of adventure with family and community alike.

Bil received little in the way of formal education instead learning about life, love, and acceptance while working the carnival circuit with his father across the southeast. His gregarious spirit led him to pursue countless jobs across the U.S. He was a member of the Merchant Marines, radio announcer, national award-winning window dresser, carpenter, film editor, and technical director all before he was 40 years old.

Bil followed his dream to California in 1972. He acted alongside Hollywood royalty such as Ron Howard, William Hurt, and Van Johnson. By the mid-1990’s, Bil had worked his way up to become the property master for several for several blockbuster films and iconic TV commercials. Bil moved to Gardnerville in 2005 to be close to family, not realizing his family would soon grow to incorporate the “Counter Culture” at Woodett’s Diner and Carson Valley Community Theatre. His passion and creativity inspired many local artists.

Bil had a striking sense of humor, he often described himself as “punny” and complained of getting his “murds wixed”. Each joke was always punctuated with a wink and sly grin.

Bil was married, first to Emma “Dale” Jobe and had one daughter. After divorcing Dale, Bil married his old flame, Leslie Landry. Bil, Dale, and Leslie remained close friends throughout their lives.

He is survived by his best friend Leslie; daughter Brooke (Tony); and grandchildren Lucaya (Matthew), and Logan.

A Celebration of Life will be held February 24th at the Aspen Park Mobile Home Community Clubhouse, 1380 Centerville Ln., Gardnerville, NV 89410 from 3 – 6 pm.

In lieu of flowers, friend may make memorial contributions to the Fisher Center for Alzheimer’s Research Foundation at https://www.alzinfo.org/donate/donation_form/