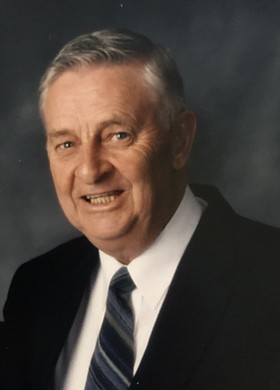 Jim Stratton of Minden, Nevada passed away peacefully with his family by his side on June 17, 2021.

Jim was born to Harry and Rebecca Stratton in Oakland, California on April 7, 1929. He, his brother and four sisters were raised on a ranch in Butte Valley near the town of Cherry Creek in eastern Nevada. When Jim was 9 years old his widowed mother moved the family to Reno. He graduated from Reno High School and attended the University of Nevada, Reno where his earned his Bachelor of Science degree in agriculture. Starting in high school and working through college, Jim worked at Hilp’s Drug Store in downtown Reno. Because of his long experience working at Hilp’s, he was one of the last few to pass the Nevada State Board of Pharmacy exam as an apprentice and obtained his pharmacist license in 1953.

On September 2, 1950, Jim married Mary ‘Jane’ Truex of Sparks, Nevada, in Carson City. In 1954, Jim took a job as a sales representative with Abbott Labs and moved the family to Southern California. Gaining the pharmacy and business experience from this job and longing to return to Northern Nevada, Jim and Jane purchased the Carson Valley Drugstore in downtown Minden, Nevada in the summer of 1963.

With nothing more than a hope and prayer and hard work ahead of them, the small-town drugstore with it’s soda fountain became a local gathering place. The early morning 5 cent coffee gang, mid-morning bank girls coffee break, and local businessman lunchtime in the back booth, became the norm. Shaking the dice cup to see who would buy that day was always exciting or ‘dreadful’, depending on the outcome.

After making the little drug store a success and purchasing a six-acre parcel between downtown Minden and Gardnerville, Jim and Jane built the Stratton Center and moved the pharmacy and gift store ‘all the way’ to Gardnerville and was considered the ‘big store’. They ran the business, along with their two sons, Dan and Steve, until November 2005, when they sold the store and Jim and Jane retired. Jim was an active pharmacist for 52 years.

Always the community-minded person, Jim was active in many organizations. He coached Little League Baseball in his younger days and was one of the original organizers of the Douglas High School Boosters Club. The regular meetings were held at Jim and Jane’s home on County Rd. He served on the Minden Town Board, Douglas County Mosquito Abatement Board, and was a volunteer fireman and EMT with the Douglas County Engine Co. A little-known service he provided was as acting administrator for the Salvation Army in the Carson Valley. As long as he owned the pharmacy, he helped stranded travelers find food, shelter and gas at all hour’s day or night. He was a longtime member of the Minden Rotary Club and was noted not only for his service, but for many of the practical jokes that occurred throughout the years.

Jim was a hunting and fishing enthusiast, which he passed on to his sons and grandsons. He loved camping with his family and friends at their property in Levitt Meadows. He spent many days with his sons and friends playing golf, often getting in 9 holes before work. Jim was also UNR’s biggest basketball fan. He had season tickets for over 40 years and shared the games with Jane, his sons, grandchildren, and great grandchildren.

Jim was preceded in death by his wife, Jane of over 60 years; grandson, Craig James Stratton; his parents, Harry and Rebecca; brother Jack, and sisters, Luella, Carol, Genevieve and Donna.

He is dearly loved and survived by his two sons and daughter-in-law Dan (Linda) Stratton and Steve Stratton. He was the proud grandfather to Jeremy (Amie) Stratton, Natalie (Traun) Stephens and Emily (Greg) Ruzzine. Great Grandpa Jim was the ‘Jelly Bean Pusher’ to his nine great-grandchildren, Christian and Caiden Stratton; Caitlyn, Grant, Taytum and Fynnley Stephens; and Dominic, Luca, and Giulianna Ruzzine. He was loved by many nieces and nephews.

Most of all, Jim Stratton was a family man, an integral member of the Carson Valley community, and a friend to so many. He will be missed by those who knew and loved him. At 92, it was a great run.

Service plans have not yet been determined but will be announced soon.

In lieu of flowers, please send any donations to the Salvation Army in Jim’s name.