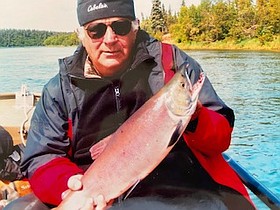 Ray was born in Oakland, CA to Raymond H. Parodi and Lee A. Parodi on November 11, 1944. He grew up in Oakland and after graduating college, started his career as a Police Officer and Detective with the Santa Cruz Police Department. He then owned and operated a deli on the wharf in Santa Cruz.

In 1988, with his son Tony, he moved from Santa Cruz to Gardnerville, NV to start a new career as a General Contractor. Together, he and Tony built several custom homes, four-plex units and duplexes throughout the valley as Construction by R. Parodi and Son.

Ray had a passion for cooking. He impressed family and friends with his traditional Italian recipes that no one could replicate. The talent had been passed down to him from his mother and grandmother. He also loved the outdoors – fishing and hunting, taking guided trips to Alaska and Montana. After retirement, he continued to share his passion of fishing and hunting with his son Tony and grandson Mason. In his most recent years, he wasn’t able to walk much but he still joined in watching from the truck. He was so proud to see Mason get his first buck this past year.

Ray is preceded in death by his father Raymond H Parodi and mother Lee A Parodi. He is survived by his sister Diane Hall, his son Tony (Katy) Parodi, his granddaughter Maizey Parodi (Caylin Keebaugh), grandson Mason (Torreyana) Parodi, his great grandson Jackson Thomas Parodi, his faithful companion Spooky, and many other extended family members.

A graveside burial will be held for family and close friends at Eastside Memorial Park in Minden Saturday, June 26th at 1pm.