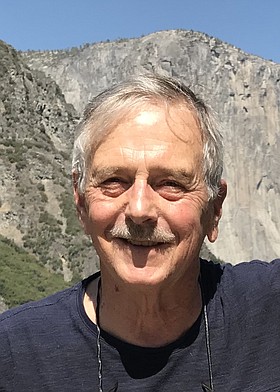 James Page Blaisdell, Jr. passed away at home in Gardnerville May 24th due to complications from a brain bleed. He was born February 12, 1938 in Oakland, CA.

Jim was the 1956 Valedictorian at Douglas County High School which he came to via a youth living in Honolulu, Hawaii. His next steps were graduation in Honors History from Dartmouth College; three years of military service; an MA in history from the University of Wyoming where he met his wife, Iris, due to a mutual interest in western history, the mountain west, and horseback riding. They were married August 17th, 1964 in Laramie, Wyoming. At that time he was also one of the first licensed sport parachutists in the U.S.

After attending UC Davis, traveling, and teaching community college in Upper Michigan, He returned to school and received a degree in International Business Administration from the Thunderbird School of Global Management in Glendale, AZ.

Various banking jobs for Bank of America, Wells Fargo Bank, and Farm Credit Services followed. These assignments allowed him to foster his interests in other cultures and peoples through much travel abroad, including living two years in Quito, Ecuador and advising in agriculture at home and abroad. Jim worked in agriculture from central California to Kazakhstan, Paraguay (USAID) and more.

Always interested in youth he spent a year after retirement as a kindergarten teacher for bilingual students in Mecca, CA. where he could employ his fluency in Spanish.

Jim was devoted to his family: sons James (Magdalena), Kevin, and grandchildren Lila and Alex with whom he loved playing “cookie monster” and “pineapple”.

Adventures in the form of travel, photography, reading, horseback riding, mountain, and rock climbing were his passions. He was an active member of Rotary Clubs in Palm Desert, CA.; Mexicali, Mexico; and Minden Rotary Club, past president.

He will be sadly missed for his zest for life, fantastic memory for diverse topics from the Civil War to female Italian literature, humanitarian interests, and connection to Latin America, its people and culture.

The final hitching post’s been reached, The Great Trail Ride is done.

His remains will rest at Genoa Cemetary with a celebration of life to be held at a future date.

Send any donations you wish to the Minden Rotary Club, P.O. Box 284, Minden, NV 89423. Sympathy messages can be left at obituaries.neptunesociety.com