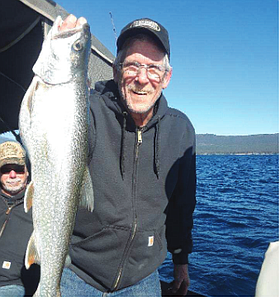 Robert (Bob) Moreno eldest brother of Dick, Mike, Lynn and Cheryl; Son of Frank & Geri Moreno succumbed to cancer and passed away on Thursday February 4th, 2021 at the age of 69.

Bob was born in San Jose, CA and raised in Santa Rosa. Bob was a 1970 graduate of Montgomery High School, a member of St. Eugene’s Parish and a Navy veteran, specializing in Search and Rescue. He was known as “Bobby” to his co-workers, was a lifelong Giants fan and a passionate fisherman. You could find him at pretty much any watering hole with Lake Ralphine at Howard Park being his go to place when he was young with the Farallon Islands being his choice for offshore fishing as he got older, a place he proudly shared with his friends and brother Mike. He was devoted to his wife, Terry, to whom he was married for 37 years. They moved to Minden, NV in 1997 to purchase a liquor store and delicatessen.

Bob is survived by his wife, daughters: Melissa and Heather, stepson Tony, grand children: Nava and Elliott, his mother, siblings and a multitude of nieces, nephews, and grand nieces and nephews. Bob was a caring individual and was loved by all of us, he will be deeply missed.

A celebration of his life will be observed at a later day. If you have interest in participating or if you would like to share your thoughts with Terry you can send your information to: rmmoreno54@gmail.com