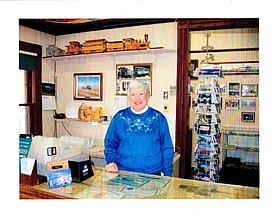 Bernadine C. Whitmore, age 96, of Gardnerville, NV
passed away peacefully and with grace in her home on January 11, 2021.

Bernadine entered this world in Los Angeles, CA to Howard and Betty D. Curran December 6, 1924. She spent her childhood in Santa Ana and attended Santa Ana High School. There she met her high school sweetheart, Dean Whitmore. Following High School, she attended
business school and worked at Santa Ana Army Air Base until marrying Dean in 1945.

Their 71 year journey began in Santa Ana, then to Bishop in 1957 where they worked and raised their two daughters. Everpresent was their shared pleasure for the beauty and serenity of the Eastern Sierra and its tranquil way of life.

Bernadine worked as a professional and accomplished business woman for several organizations including joint ownership with Dean of a furniture/gift store for 10 years.

During her working years, she raised her daughters never missing a beat. Whether attending a school function, a girl’s shopping trip, weekend skiing, transporting a group of girls to out of town high school games or hosting family celebrations and holidays, she was there!

Bernadine enjoyed various club and service organizations in addition to the pleasure of meeting and building new and lasting friendships. She treasured her volunteer days at the Laws Museum in Bishop and later at the Douglas County Historical Museum following a move with Dean to Gardnerville in 2006.

Perhaps her most cherished quality was her loyalty to family and friends. With a sparkle and twinkle in her eyes, she was most happy sharing and giving of herself.

Known as a passionate reader, she often referred to her books as ‘friends’ and felt the same for music and later her travels with Dean. Whether hiking quiet mountain trails garnished with wildflowers or walking gentle paths along
her beloved Pacific Coast, she displayed her
innermost joy.

In essence, Bernadine will be remembered as one who possessed unconditional love and excitement not just for family, friends and strangers as well, but for life and its adventures always with a smile.

The family would like to thank the entire staff of The Chateau at Gardnerville for their extraordinary care and love for Bernadine as well as the excellent care lovingly given by Kindred Hospice.