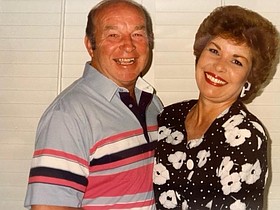 Donald & Arlene Ingham
Friends and family were terribly saddened by
the sudden passing of Donald and Arlene Ingham
6 days apart due to an unexpected illness.
Donald was born in California on Jan. 4, 1938 and died Dec. 15, 2020. Arlene was born in California on March 27, 1941 and died on Dec. 21, 2020.
They were residents of Gardnerville NV for the past 24 yrs. and moved to the area from California.
Don & Arlene were members of the Douglas Dukes car club, Don was a lover of classic cars and spent time at local car shows with his 1950 Mercury. Arlene spent time with the Crystal angels charity and was
an avid dog lover.
They were married for 54 yrs. and are survived by Don’s three sons John, Timothy & Jeffery Ingham, brother Tom Ingham, sister in law Joanne Ingham, niece Cindee Maxwell, nephew Greg Ingham, niece Yvette Davis, great nieces and nephews, and many friends they called family. Don & Arlene will be
greatly missed and loved by many.