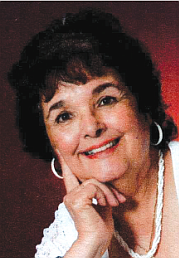 Cathy was born October 25, 1941, to Sebastian and Modesta Gonzales in Tepatitlan, Mexico.
She moved from Guadalajara to Tijuana and worked as an immigration attorney secretary where she met her first husband, John Ingham. They were married in 1961 and lived in Escondido, Calif. In 1974, they moved their family to Carson City.

John passed away in 1990 from complications with Alzheimer’s. She then met Ted Sanchez and was blessed to find the next love of her life. They were married for 30 years, and lived in Sparks, NV. Cathy loved aviation and flowers. After owning a flower shop with her late husband John, it became a passion. She and Ted enjoyed a life together with fun, laughter, and travel, sadly cut short due to Alzheimer’s. Ted was by her side and cared for her at home and gave her a safe, comfortable life filled with love and devotion in her final years.