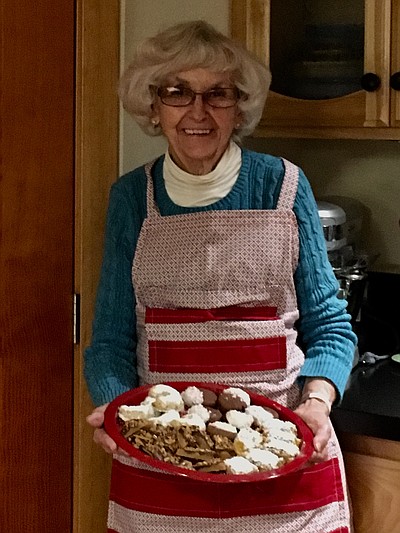 Barbara was born on August 7, 1929 in Grand Junction, Colorado. At the age of 4.5 her mother passed away which left her and twin sister Betty, sister Eulalia and older brother Lester to be raised by their father Ira Leon Mock.

In 1950 she left Colorado and moved to Reno, where she married Dave Hybarger. They developed a painting and drywall business over the years.

In 1978 Barbara married Bill Martin of Eureka, Nv, where they made their home for several years. Bill passed away on July 17, 1992. With Bill she developed a special relationship with stepdaughter Patti Martin Anderson (Mike) of Carson City, and stepson Tony Martin (deceased) and all of her step grandchildren, Shelby, Chelsea Ward and Karin Martin).

With her family being her first priority in life, she managed to have a career as a bookkeeper and Real Estate Agent. She was honored as “Realtor of the Year” in 1993 and 1996 by the Fallon Board of Realtors.

She enjoyed her hobbies, sewing, crocheting and cooking. She was an excellent seamstress from wedding dresses to recycled grain bags converted to shopping bags. Barbara was always very particular and meticulous with her endeavors and a project wasn’t finished until it was “perfect”. She also loved her great grandchildren and the ability to video chat or window visit with them during the pandemic. Those times always brightened her day.

Barbara was a very caring, compassionate and selfless person that earned respect from those who knew her. She will be deeply missed but forever in the heart of all her family and friends.

Private Graveside services will be held in Eureka, NV at a later date.

In lieu of flowers, donations can be made to the Multiple Sclerosis Society of Nevada in Barbara’s name.