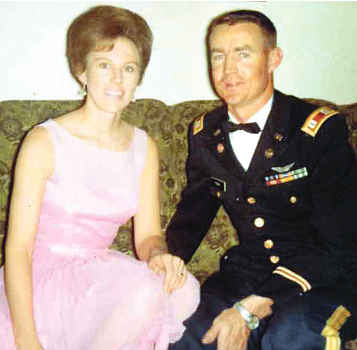 Following Val’s graduation from high school in 1957, he attended University of Nevada in Reno, NV. While in college, on September 5, 1959, Val married his wife of 60 years, Carolyn A. York. Additionally, while Val was in college, he continued to follow his passion for playing and excelling in basketball and baseball. Val was inducted into the University of Nevada Sports Hall of Fame for both basketball and baseball in 1989. Val also participated in Army ROTC while at the university and received his commission as a 2LT in the Army after graduating in 1961. In addition to athletics and ROTC, Val was known to be a good husband, father, and friend.

Val served 20 years in the Army, including two tours in Vietnam as a Transportation and Infantry Officer and Aviator. While on active duty, among the many awards and decorations Val received were the Distinguished Flying Cross, Bronze Star Medal, and 32 Air Medals. In 1975 the Army assigned Val and family to Bozeman, MT where Val served as the Deputy and later as the Professor of Military Science at Montana State University. Val retired from the Army in 1981 and spent the rest of his life in Bozeman.

During Val’s 45 years in Bozeman, he enjoyed fishing, hunting, and traveling with Carolyn.

In addition to Val’s annual fishing and hunting trips with old friends to Eastern Montana and elsewhere in the Northwest, Val and Carolyn took many trips about the rest of the United States. They visited Maine to Alaska, Florida to Southern California, and pretty much any state or national park in between. They also traveled together internationally to New Zealand and Mexico. That said, their passion was to travel together while chasing grandchildren. Val and Carolyn spent many months in their little RV trailer attending grandchildren’s activities in and around Kentucky, Kansas, and Texas.

He is survived by his two sons, Tom and Mick; three grandchildren and five great-grandchildren; one sister; and extended family and dear friends.

Arrangements are in the care of Dokken-Nelson Funeral Service. www.dokkennelson.com