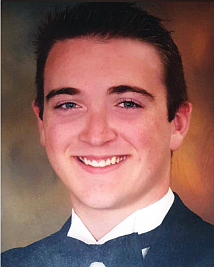 Logan was serving in the US Navy as Nuclear Training Electronic Technician ETN2, Second Class Petty Officer, on the USS Charlotte Submarine. In Honolulu HI at Pearl Harbor.

Logan will be remembered for being smart, funny, having a kind smile, a goofy sense of humor, and for always being there for his friends and family. He will be missed by many and he shall never be forgotten.

Logan was born eight weeks early on August 15,1998. He spent the first six weeks of his life in neo- natal ICU at Lutheran Medical Center in Wheatridge CO. He received a blood transfusion from his father, in order to speed up his recovery and was able to go home to Highlands Ranch, CO on September 25, 1998.

A celebration of life will be held on Saturday, April 17th, 10:30 am at the Gardnerville Elks Lodge.

All are welcome to come help celebrate Logan’s life.