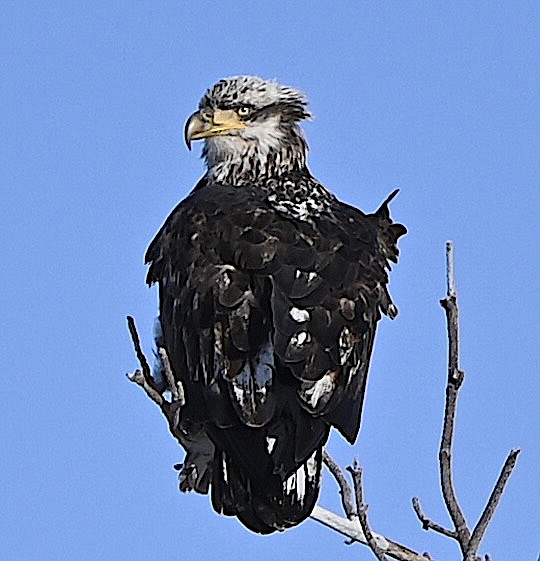 Maria Pearson submitted this photo of a juvenile eagle on Monday afternoon. Eagles are out in the fields in preparation for Eagles and Agriculture which started on Thursday with the reception.

Genoa, Nev. — Three new members will be joining the Library Board of Trustees 10 a.m. today. Bob Conner, Theresa Degraffendried and Kimberly Estee were appointed to three open seats on the board, joining Trustees Bonnie Rogers and Starla Doughty. The board meets at the Minden Branch on Library Lane.

Minden Rotary approved a $2,000 grant for the Douglas County Public Library that is scheduled to be awarded at the Thursday’s meeting of the club. The money is going to pay for the library’s new Mango Languages program.

A 200-pound bear sow, which was camping out under a bush at a Douglas Avenue home, escaped before she could be darted. Gardnerville now has a second bear trap in hopes of catching her.

The U.S. Forest Service is pile burning above Genoa. They have signs out on either end of town, and at the base of Carson Street asking people not to report a fire.

Is the drought over? That was the question before a panel of forecasters and climatologists on Monday morning and the answer was … “too soon to tell.” Irrigation season starts April 1, so we’ve got a ways to go, yet.

It’s cold out this morning with single digits across the lowlands. Minden-Tahoe Airport is reporting 5 degrees this morning. The forecast calls for calm conditions, sunny skies and a high of 38 degrees.