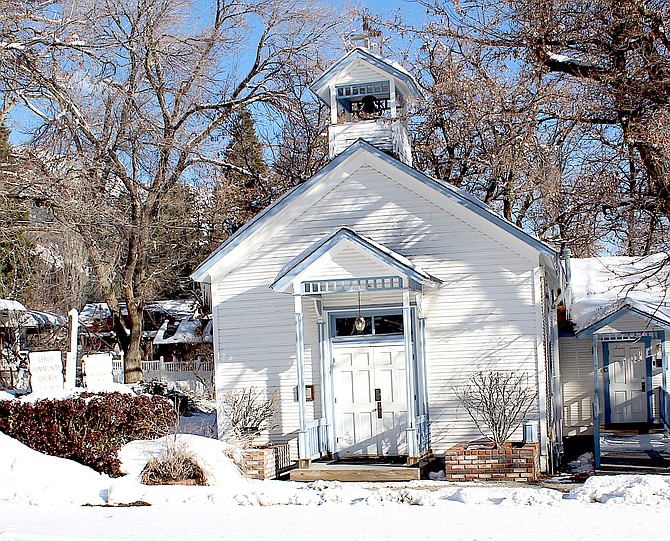 The sun is shining on the Genoa Town Church on Friday morning.
Photo by Kurt Hildebrand.

Within an hour on Thursday, items involving a drinking establishment and a church were approved for Nevada’s oldest settlement.

The Douglas County Liquor Board approved an onsite unrestricted liquor license for the new owners of the Pink House in Genoa which is al-so a restaurant.

The structure was once home to Candy Dance founder Lillian Virgin Finnegan. It predates Nevada’s statehood by almost a decade, having been built in 1855. Work to restore the property began in August 2014 and was completed in October 2015.

Money that was originally designated to examine the feasibility of repairing the Genoa Town Church may now go to actually fixing the church.

Douglas County commissioners on Thursday approved shifting $45,550 that was originally budgeted for a feasibility study to construction.

Allowing the transfer was a pledge by new Genoa residents Eric and Maigorzata Nichol of the Engineering firm Moffatt & Nichol to plan the work.

“I would like to shine a little spotlight that this money that would have gone to engineering can now go to construction,” commissioner Sharla Hales said. “I just think that’s marvelous.”

The change was approved by the Genoa Advisory on Nov. 2. The church was built after the fire of 1910 to replace a previous church that was lost in the blaze.

“These are historic buildings in our community that we really need to preserve,” Chairman Mark Gardner said.

Genoa Town Manager David Qualls said he met with the firm on Wednesday and that plans are being drawn up for the work.

The church is owned by the town, which rents it out as a venue for weddings and funerals. It is also home to a congregation that leases the church on an annual basis.

There were concerns early last year that the church might require upwards $1 million of work to repair the foundation.

Genoa Co. owner Roger Falcke and Town Board member Brian Crowe climbed under the structure and determined the church foundation is solid.

Work to improve drainage so water doesn’t roll under the church and undermine the foundation.

Because Nixon Street is built on a slope, the church’s uphill side is subject to flooding. Falcke has long advocated building the wall on that side and a drainage ditch, so water doesn’t build up there.