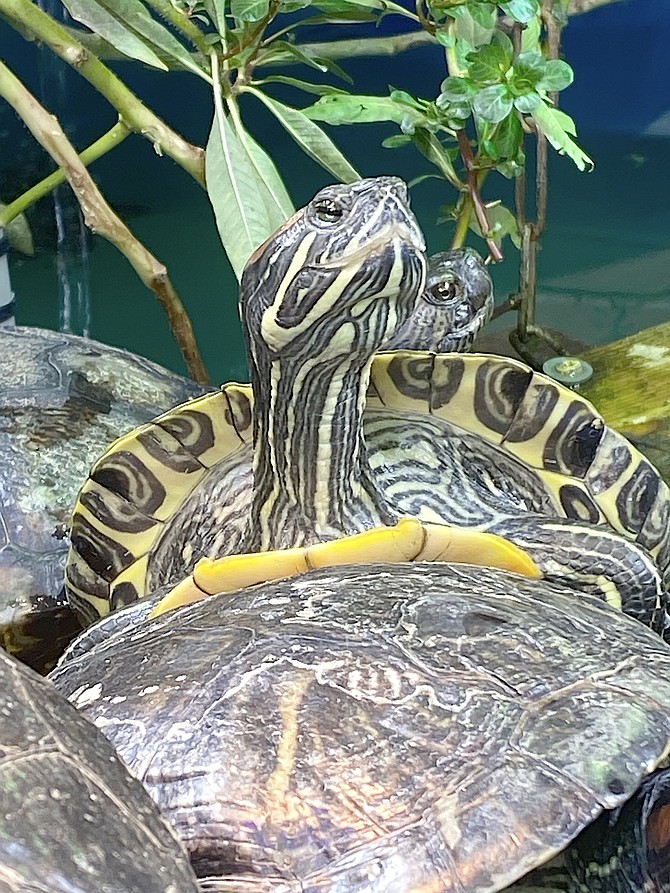 A turtle brought inside Don Zirbel’s home to keep warm during the New Year’s Eve snow storm. Photo Special to The R-C

It is without doubt that the unexpected severity of the snowstorm on New Year’s Eve brought upheaval across Douglas County, but when it caused a widespread power outage, Topaz Ranch Estates resident Don Zirbel’s biggest concern was to save his turtles.

“We have over 100 turtles and tortoises, along with a number of nonshelled critters including dogs, cats, chickens, ducks, a chinchilla, a bearded dragon and several fish,” said Zirbel.

He said most of the turtles and tortoises are species that do not hibernate and must be kept warm year-round.

“Normally, this is not an issue, as we have a number of heated enclosures for the tortoises and a heated indoor pond for our aquatic turtles, and during severe cold snaps, many of the tortoises are moved indoors as an added measure of precaution, but this was different.”

Zirbel said he has a large propane generator which powers all the heat systems for the critters in addition to running the essentials in his home, however, after the second full day without power and continuous operation of the generator, he became concerned of running out of propane if the outage lasted longer.

With no way to refill, due to the weather and hazardous road conditions, Zirbel did what he could to make his critters comfortable.

“To conserve power requirements on the generator and stretch our propane as long as we could, we devised a plan to relocate all of the tortoises from their heated enclosures into the house,” said Zirbel.

They cut back power consumption to the bare essentials and bundled up with the propane fireplace every so often, just long enough to take the edge off of the cold, while monitoring the critters and conditions going on outside.

“I stayed up for the first two nights, checking on animals, and also monitoring my fire and police scanners for updates and conditions,” he said.

After 72 hours, the power came back on and the next day the propane company was able to make it out to Zirbel’s property.

“Long story short, all of our animals did well with no issues,” he said. “They were pretty grumpy from the inconvenience and being moved around, but they did OK. So many people were in harm’s way during this storm, and I heard countless emergency calls for people who are oxygen-dependent who were running out of oxygen due to the power outage, so I feel we were extremely fortunate to have endured this event with relatively minor inconveniences and no endangerment to our animals.”