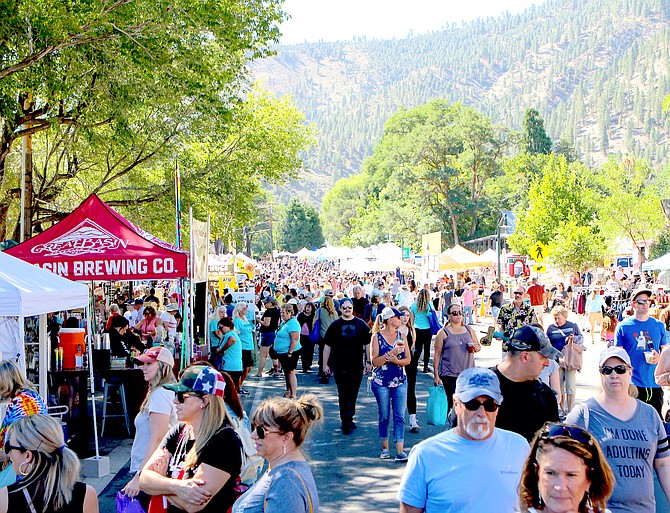 Thousands of visitors packed Genoa over the weekend.
Photo by Brad Coman.

Genoa’s annual Candy Dance Craft Fair likely brought a record of people into the tiny town over the weekend.
“It seems like there’s three times as much as there has been in the past,” said Lake Tahoe resident Nathan Cruz.
Thousands of people from Minden, Gardnerville and Genoa, Lake Tahoe, Reno and beyond walked the more than 300 vendors throughout the town.

“We usually come for the nuts and rum runners from the East Fork firefighters,” said mother and daughter Jeanne and Rachel Delalo.
Cruz and his friends Julianna Rogacs, Megan Cruz and Chance Smith enjoy the many food choices and people watching while Reno resident Jeanne Davies said she enjoys shopping all the vendors.
“I start at one end and work my way through,” she said.  “I’ve been coming every year forever now, it seems. I’m starting to recognize some things I’ve gotten in the past so looking for something new is the challenge and fun.”
The record turnout continued into Sunday afternoon, with longtime residents, who usually enjoy a little more leisurely experience, rubbing elbows with thousands of visitors. Generally estimated at 30,000 visitors over the two days, there is no actual means of determining the turnout.
In the Genoa Town Hall, where the homemade candy is sold, more than a thousand pounds had been sold by noon, which was distributed with the help of Carson Valley Middle school Leadership students.
The Candy Dance has been a tradition since 1919 and started as a fundraiser to help purchase street lights for the town. More than 100 years later, it continues to be a tradition that brings people from all over the region to Genoa. The two-day event helps fund the town throughout the year.