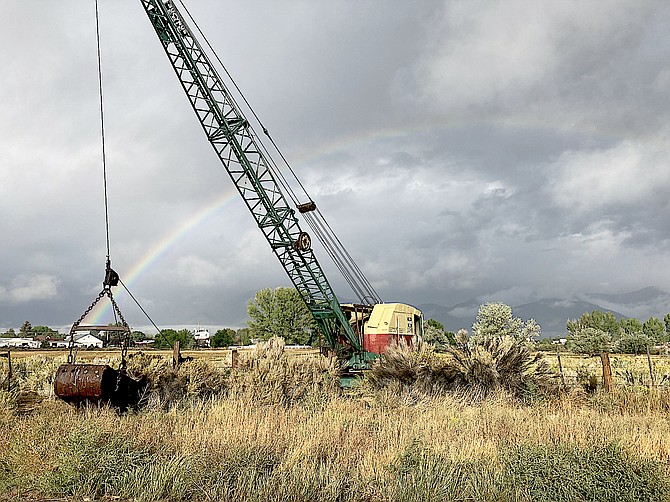 Resident Irene Taylor took this rainbow photo on Wednesday from behind High Sierra Fellowship in Gardnerville.

Genoa, Nev. — There’s a big old fog bank down by the river this morning, which might extend to Highway 395. Watch out for icy conditions over the bridges on your morning commute. It’ll burn off by lunchtime.

Technically today is both the last day of summer and the first day of autumn, since the equinox isn’t until 6 p.m., at least according to the Internet. That jibes, since there was snow on Jobs Peak, but it didn’t quite get cold enough to kill the tomatoes.

Candy Dance preparations are already underway in Genoa, which means it’s going to be very busy in Nevada’s oldest town. I would suggest maybe holding off on that jaunt to town until next week.

Street Vibrations starts today in Reno, which means there will be a lot of motorcyclists out on the road, particularly along the foothills as they visit the Genoa Bar. Watch out for them on the road over the next few days.

The 911 Surcharge Committee will be updating their master plan 10 a.m. today with an eye to the budget. With a revenue of $568,147 and estimated expenses for last year of $533,940, the program will come to within $23,207. The projected balance for this fiscal year is expected to be $9,671 before the debt service is paid off.

Among the capital projects funded from the balance will be the $250,000 renovation of the Communications Center which is located across from the courthouse. The committee meets in commissioner chambers. You can find out more by visiting www.douglascountynv.gov and clicking on agendas.

A game of Banned Books Jeopardy is 4-5 p.m. today at the Minden Branch of the Douglas County Public Library, 1625 Library Lane, Minden. You can find out more on their social media or at library.douglascountynv.gov or 775-782-9841.

It looks like Minden-Tahoe Airport got down to 32 degrees this morning, but the rest of the Valley and even the mountains managed to dodge a freeze.

Today’s forecast is for sunny skies and a high near 72 degrees, with the wind calm, picking up to 5 mph this afternoon.