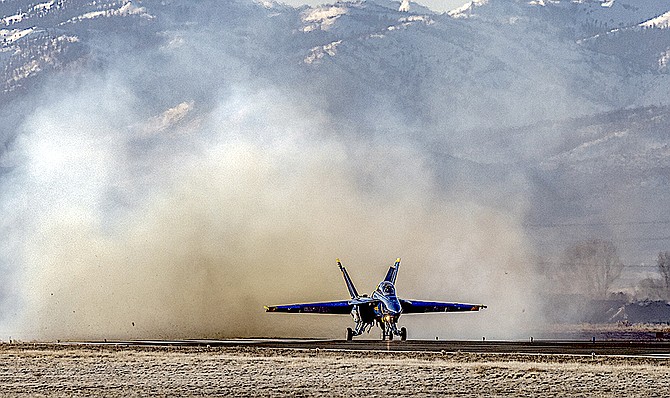 A Navy F/A-18 with the U.S. Navy Flight Demonstration Squadron Blue Angels in Minden.
J.T. Humphrey | Special to The R-C

Navy Week returns to Western Nevada Sept. 26 to Oct. 2, culminating in a performance by the U.S. Navy's Blue Angels at the Minden-Tahoe Aviation Roundup Oct. 1-2.

Navy Week will give the community an opportunity to learn about the Navy, its sailors and its importance to national security and prosperity.

Over 30 sailors will participate in education and community outreach events throughout the city, culminating in a performance at the Minden-Tahoe Aviation Roundup by the U.S. Navy Flight Demonstration Squadron, the Blue Angels. All participating commands will follow DOD, CDC, state, and local guidelines for safety during the current pandemic.

The Navy's senior executive host is Rear Adm. Bruce Gillingham, 39th Surgeon General of the Navy, and Chief, Bureau of Medicine and Surgery. During Navy Week, he will participate in community engagements, meet with students, and speak with local businesses, civic, education, and government leaders.

“Sailors have always been ambassadors of the Navy in their actions and words,” Gillingham said. “We serve and represent you – the American public. Navy Week is an opportunity for people to meet with the women and men who protect America at sea, preserve economic prosperity, and help keep the seas open and free. It’s an opportunity to strengthen our important military and community relationships.”

Since 2005, the Navy Week program has served as the Navy's flagship outreach effort into areas of the country without a significant Navy presence, providing the public a firsthand look at why the Navy matters to Western Nevada.

Throughout the week, Sailors will participate in various community events across the area, including engaging with students across multiple schools and volunteering for the city of Reno and Carson City at Keep Truckee Meadows Beautiful, Boys and Girls Clubs, Toys for Tots, and the Food Bank of Northern Nevada. Residents will also enjoy free live music by Navy Band Northwest at Street Vibrations, the Tony Armstrong Amphitheater, Sparks Lazy 5 Summer Music Series, and other public venues throughout the week.

The celebration is one of 13 Navy Weeks in 2022, which brings a variety of assets, equipment, and personnel to a single city for a weeklong series of engagements designed to bring America's Navy closer to the people it protects. Each year, the program reaches more than 140 million people -- about half the U.S. population.