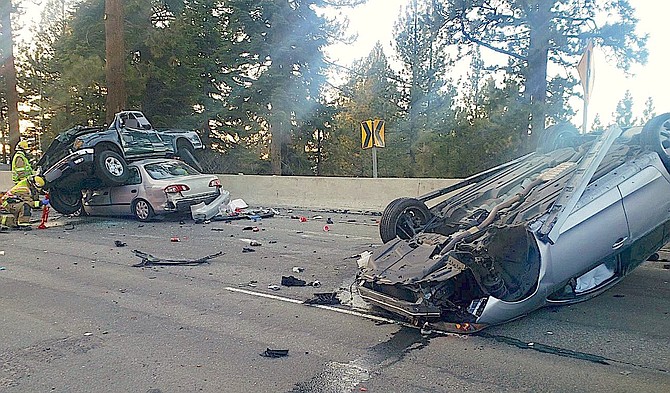 The couple in the Toyota sedan escaped serious injury after a pickup landed on their hood in a March 7, 2021, collision on Highway 50 near Glenbrook. NHP Photo

A California couple was enjoying an afternoon drive at Lake Tahoe on March 7, 2021, when they looked up to see two vehicles tumbling end over end at them.

A collision between a Subaru Impreza and a Toyota Tacoma on Highway 50 near Glenbrook sent both vehicles hurtling toward the couple’s Toyota sedan.

The driver of the sedan said he saw the silver Impreza bounce over the sedan and then next thing he knew, the pickup landed right on the couple’s hood.

They were able to crawl out of the Toyota’s back doors with only a scratch.

The driver of the Tacoma, Gardnerville resident Rafael Cortez, 52, was not so lucky, and neither was his niece who was a passenger.

The pair were on their way to work when the Tacoma was hit from behind by the Impreza, driven by Alfred James Villalobos, 28.

According to court documents, Nevada Highway Patrol investigators said the Subaru hit the Tacoma from behind sending both vehicles tumbling. Cortez’ passenger received a fractured neck and chest.

Villalobos allegedly told investigators he’d had 3-4 beers about two hours before. A blood draw included in the report said Villalobos had a .154 blood alcohol content.

An eight-day trial was scheduled in the case. Attorney Matthew Ence is representing Villalobos. Prosecutor Chelsea Mazza will be representing the state.