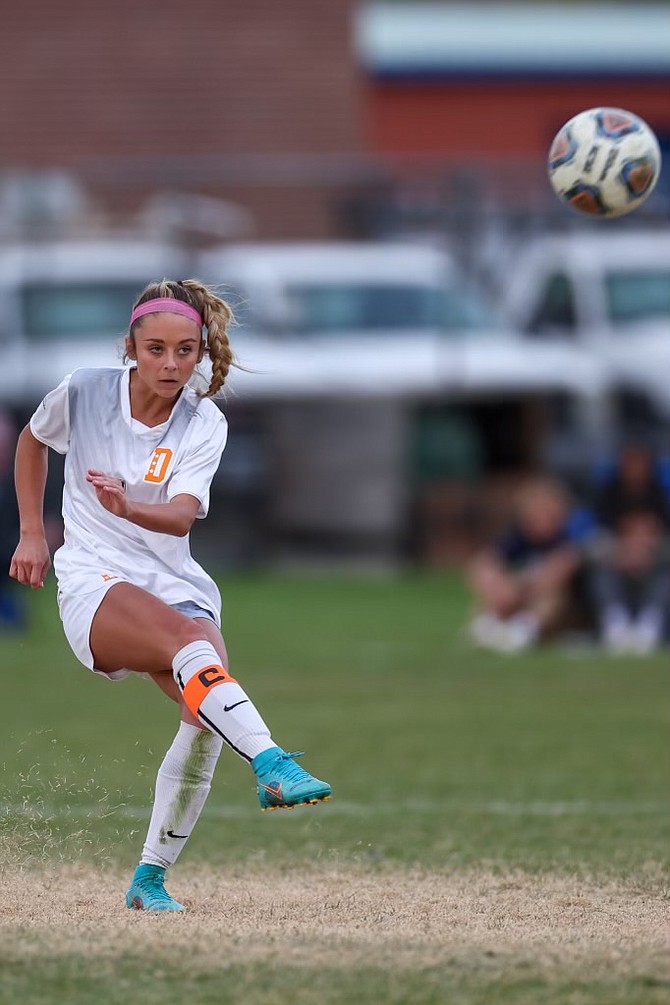 Douglas High defender Kylee Lash boots the game-winning goal off a free kick, during the 78th minute Monday afternoon at Reno. Lash’s goal was the only score of the contest.
Photo by Ron Harpin.

In the postseason, someone has to capitalize on opportunities.

During the 78th minute of the first round of Class 5A regional postseason play, Douglas High girls soccer had a senior captain step up.

Defender Kylee Lash, who has been the team’s free kick specialist all season, lined up from 35-40 yards away from net.

Her free kick easily cleared Reno’s wall and sailed toward the top left corner, deflecting off the Husky keeper’s hands and into the back of the net.

“Kylee has done that all season. That’s why she is definitely an all-conference player,” said Douglas head coach Andrew Robles. “We know she can hit it, especially from that far. We’ve scored a lot of goals that way this season, so why not keep it going.”

The win for the Tigers sets up a regional semifinal contest at No. 2 McQueen (9-3-4) Wednesday at 3:30 p.m. Wednesday's winner will clinch a spot in the state tournament.

Kylee Lash scores on a free kick from WAY out. Tigers have taken the lead in the final moments. pic.twitter.com/2ZRz2tzMun

Douglas and Reno played even throughout Monday’s contest.

Not just on the scoreboard, but in chances on net.

The two teams traded scoring chances in the second half after a first half left both squads with play to be desired.

Tiger senior forward Seara MacPherson hit the crossbar with a long shot in the 42nd minute only to be quickly followed by a Kaylee Bradford shot, which also caromed off the top bar.

If she was, Martin’s saves throughout the evening looked easy.

“We know we can keep ourselves in the game if we can shut down their forwards,” said Robles.

Reno forwards Kylee Quain and Lauren Kauffman had both tallied 17 goals this season, which were tied for second most in the Class 5A North.

The Huskies also had the most goals scored as a team in league play this year.

It was only the second time all season Reno had been shutout.

Douglas is on the mend and is starting to come back together after battling injuries all season.

MacPherson didn’t play the last time the Tigers met with the Huskies. Zoe Baligad was a steady presence on the pitch after nursing her way back onto the field in the two team’s previous meeting. 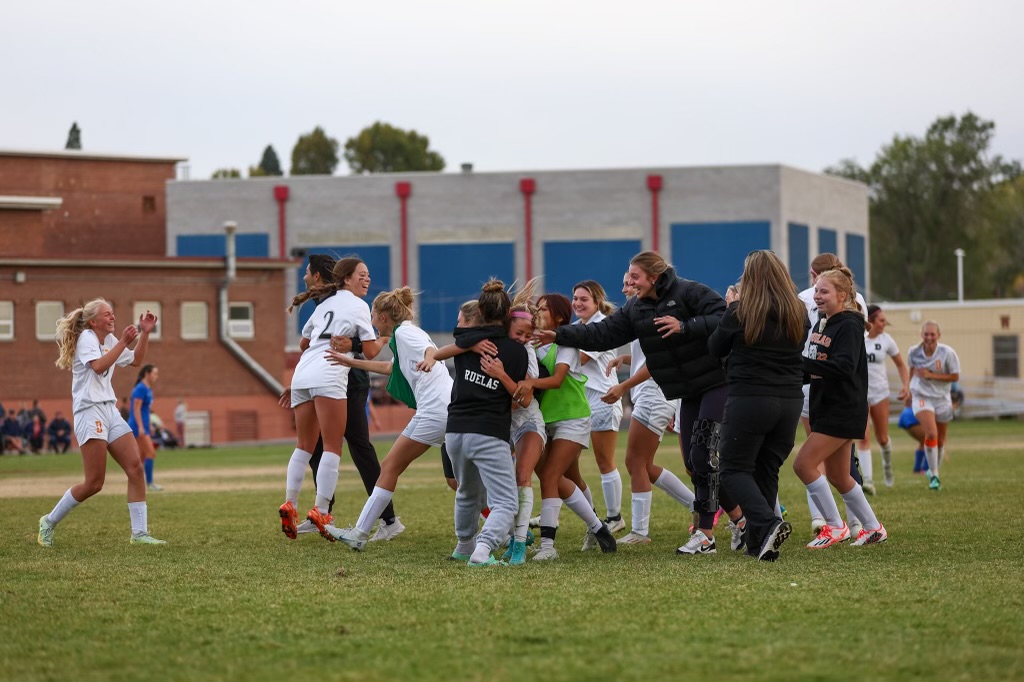 (The Douglas High girls soccer team spills onto the field after upsetting third-seeded Reno, 1-0, in the opening round of the Class 5A North regional playoffs Monday afternoon. / Ron Harpin)

Going down a player

In the 55th minute, Douglas went down to 10 players after Johanna Ruelas was involved in an on-field altercation with a Reno player.

Ruelas received a red card and was ejected from the contest.

Reno’s Jasmine Corraejo was also red carded for running on the field from the Husky bench.

While the chaos was being sorted out, a Reno supporter was removed from the premises after approaching the Douglas bench, on the other side of the field, and making remarks toward the Tiger players.

After the dust settled, Douglas was forced to play down a player for the final 25 minutes of regulation.

Due to the red card, Ruelas will be suspended for Wednesday’s contest as well.

“It just got carried away. Honestly, I didn’t see who started what, I just saw that the girls were in a tangle,” said Robles. “I don’t condone it, but I have to go watch the film on that. It sucks for us because now we lost a player.”

UP NEXT: Douglas will head to McQueen Wednesday for a 3:30 p.m. kick against a Lancer team the Tigers have yet to defeat this season.

During the regular season, the two teams met twice in a span of eight days with the Lancers winning 5-3 in Minden and then 3-2 on their home field. 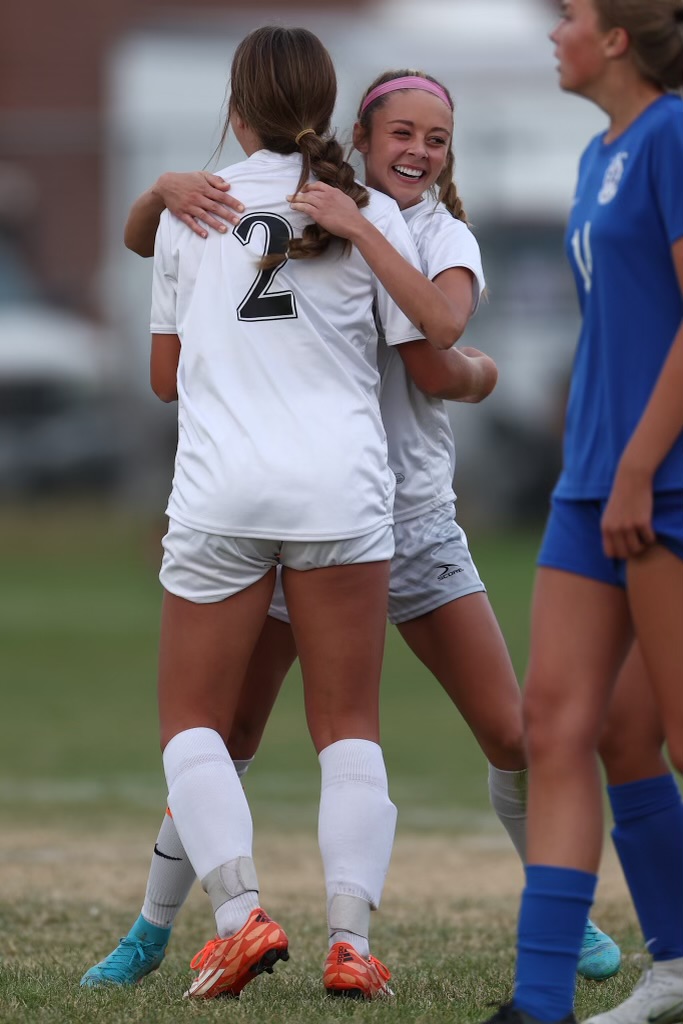 (Douglas High's Sky Rasmussen (2) hugs Kylee Lash after Lash scored from a free kick in the 78th minute. Lash's goal was the only tally of the contest and served as the game winner. / Ron Harpin)