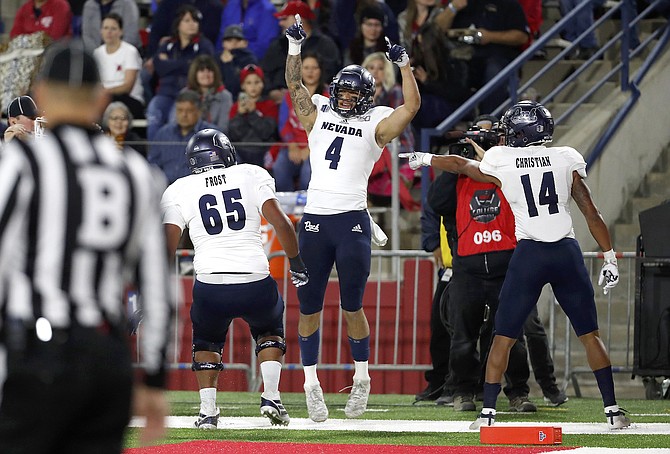 LAST YEAR’S MEETING: The Wolf Pack beat San Jose State 27-24 last year at Mackay Stadium on a Brandon Talton 45-yard field goal with three seconds to play. Nevada linebacker Daiyan Henley, who now plays for Washington State, returned a San Jose State fumble 56 yards for a touchdown and defensive back Berdale Robbins returned an interception 86 yards for another score as the Wolf Pack took a 14-7 lead in the third quarter.PACK SPLATTERS SPARTANS: The most one-sided game in the rivalry was in 2009 when the Pack won, 62-7, at San Jose. The Wolf Pack tied a FBS record with four players rushing for 100 or more yards. Vai Taua had 144, Colin Kaepernick had 115, Lampford Mark was at 114 and Luke Lippincott had 112. The four also combined for seven touchdowns on the ground as Nevada rushed for 517 yards and eight touchdowns as a team. The Wolf Pack scored touchdowns on eight of its first nine drives and finished with 665 total yards, going 11-of-12 on third down. THE HEAD COACHES: Nevada’s 58-year-old Ken Wilson is 2-6 overall in his first season and is still looking for his first Mountain West victory (0-4). Brent Brennan is 24-39 overall and 16-26 in Mountain West games in his sixth year as San Jose State head coach. The 49-year-old Brennan, whose Spartans won the Mountain West title in the 2020 pandemic-shortened season with a 7-1, 7-0 record, was 3-22, 2-14 after his first two seasons. Brennan was an assistant coach at Oregon State in the Pac-12 from 2011-16 while Wilson was in the conference as a Washington State and Oregon assistant from 2013-21. Both coached at their  current schools as assistants long before becoming head coach. Brennan was a San Jose State assistant from 2005-10 while Wilson was a Nevada assistant from 1989-98 and again from 2004-12. PACK FACING FAMILIAR FACES: The Wolf Pack, at times, will likely have to cover three former teammates at once on Saturday. San Jose State’s top three wide receivers are all former Wolf Pack players. Elijah Cooks has caught 29 passes for 542 yards and three touchdowns, Justin Lockhart has caught 17 for 298 yards and no scores while Charles Ross has grabbed 14 passes for 204 yards and one score. Ross transferred from Nevada after the 2020 season, following former Wolf Pack wide receivers coach (2017-20) Eric Scott to the Spartans while Cooks and Lockhart transferred this past off-season. STREAKING WRONG WAY: The Wolf Pack’s current six-game losing streak has given Wilson the fourth-longest losing streak ever in one season by a Pack coach.  Dick Trachok lost nine in a row in 1964 while Chris Tormey (2000) and Joe Sheeketski (1950) each lost seven in a row. Trachok actually lost 11 games in a row over the 1963 (last two games) and 1964 (first nine) seasons. Two other Pack coaches also had long losing streaks over two seasons. Buck Shaw lost six in a row over the 1926 and 1927 seasons and later lost seven in a row over the 1927 and 1928 seasons. Brick Mitchell lost eight in a row over the 1934 and 1935 seasons.RUNNING GAMES IN A RUT: Both the Spartans and Wolf Pack have struggled to find a consistent running game this year. San Jose State is 11th in the Mountain West at 101.3 yards a game on the ground while Nevada is 10th at 113 a game. Kairee Robinson leads the Spartans on the ground with 343 yards and five touchdowns in six games while Toa Taua leads Nevada with 496 yards and seven scores in eight games. Taua has nearly twice as many receiving yards over the last two games (112 on 11 catches) than rushing yards (66 on 24 carries). Robinson also has just 59 yards on 21 carries over his last two games and just 53 receiving on six catches.SPARTANS’ DEFENSE AMONG FBS BEST:  San Jose State’s defense has allowed just 14.5 points a game, ranking it fourth in FBS. The Spartans also allow just 295.7 yards a game (16th in FBS). San Jose State’s defense is led by senior linebacker Kyle Harmon (52 tackles, 11 in three different games), defensive lineman Viliami Fehoko (34 tackles, 7.5 for a loss, three sacks) and safety Tre Jenkins (34 tackles, five for a loss). Seven different Spartans have one interception each. San Jose State has allowed more than 17 points in just one game this year, a 24-16 loss at Auburn.PACK OFFENSE IN DEEP SLUMP: Nevada has scored just 57 points over its last five games. It is the fewest points the Wolf Pack has scored over a five-game stretch since it scored just 40 over its last five games in 1975. That 1975 team (Jerry Scattini’s last year as head coach) also scored just 85 points over its final nine games and just 121 all year over 11 games. Scattini’s Wolf Pack scored more than 20 points in just three of his last 20 games as head over the 1974 and 1975 seasons. This year’s Wolf Pack has gone its last five games in a row without scoring more than 20. The offense this year has scored just two touchdowns over its last two games and just seven over its last five games.

NEVADA LAST WEEK: The Wolf Pack lost to San Diego State, 23-7, at Mackay Stadium. The Pack trailed 10-0 six minutes into the game but trailed just 13-7 at halftime as Shane Illingworth completed his first touchdown pass of the year, a 20-yarder to Spencer Curtis, less than a minute before halftime.

SAN JOSE STATE LAST WEEK: The Spartans’ non-conference game against New Mexico State was postponed because of the accidental death of San Jose State freshman running back Camdan McWright near campus earlier in the week. The Spartans haven’t played since a 17-10 loss at Fresno State on Oct. 15. Quarterback Chevan Cordeiro, a transfer from Hawaii, connected with Elijah Cooks for a 32-yard touchdown pass and a 10-7 lead 15 seconds before halftime.

OFFENSES TAKING SECOND HALF OFF: Neither the Wolf Pack or San Jose State has scored a touchdown in the second half since Oct. 7. Cordeiro hooked up with Cooks for a 20-yard score against UNLV on Oct. 7 in the fourth quarter of a 40-7 win over UNLV while the Pack’s Taua scored on a 2-yard run in the fourth quarter of a 17-14 loss to Colorado State the same night. Since Oct. 7, San Jose State was blanked in the second half at Fresno State On Oct. 15 and did not play last week, while Nevada had a field goal in the second half in a 31-16 loss at Hawaii on Oct. 15 and then was blanked after halftime in a 23-7 loss to San Diego State at home last week.

AT STAKE FOR NEVADA: The Wolf Pack’s slim chances for a bowl invitation will be on the line in each of the final four games of the year. One more loss will cause the Pack to miss a bowl game for just the fourth time in the last 18 years and for the first time since 2017.

AT STAKE FOR SAN JOSE STATE: San Jose State is still very much alive in the West Division race at 2-1 in league play. The Spartans, at 4-2 overall, shouldn’t have to be all that concerned about failing to get to six wins and a bowl invite since it still has five or six (if the New Mexico State game is played) games remaining.

PACK A HOMECOMING PATSY? Saturday will be the Spartans’ Homecoming game. The only other time Nevada has served as San Jose State’s Homecoming opponent was 1994 when the Pack took home a 42-10 victory behind 194 yards rushing by Marcellus Chrishon (a 56-yard TD) and 289 yards and three touchdowns from quarterback Mike Maxwell (a 74-yard score to Dan Zamora). Maxwell also scored on a 1-yard run.
WHAT NEVADA NEEDS TO DO TO WIN: Controlling San Jose State quarterback Chevan Cordeiro would be a good start. Cordeiro has completed 117-of-207 passes for seven touchdowns, 1,610 yards and just one interception in six games. He’s also run for 173 yards, though 109 came in one game against UNLV. The last time Cordeiro faced the Wolf Pack he completed 26-of-32 passes for 246 yards and a touchdown and rushed for 62 yards and another score for Hawaii in a 24-21 win over the Pack and Carson Strong in 2020 (he didn’t play for Hawaii last year against the Pack). He’s experienced, efficient and productive. Cooks, Lockhart and Ross will also no doubt be motivated to beat their former teammates with Cordeiro’s help.

WHAT SAN JOSE STATE NEEDS TO DO TO WIN: The Spartans’ have had to wait two weeks to get the taste of a 17-10 loss at Fresno State out of their mouths. So they will be motivated in front of the home crowd to right their ship on offense. The Spartans, like all teams, will focus on stopping Toa Taua and the Pack ground game and dare Nevada quarterbacks Shane Illingworth or Nate Cox (or both) to beat them through the air.

PREDICTION: San Jose State 24, Nevada 17. There’s a reason San Jose State is a three touchdown-plus favorite on Saturday. They are at home, they allow just two touchdowns a game, they devour run-based offenses and they are well-rested. But there is also a reason why the Spartans scored just 10 points in their last game (at Fresno State). They don’t run the ball all that well. The Pack secondary is talented — and will be motivated facing Cooks, Lockhart and Ross — and should make sure there isn’t a three-touchdown-plus difference in the final score.