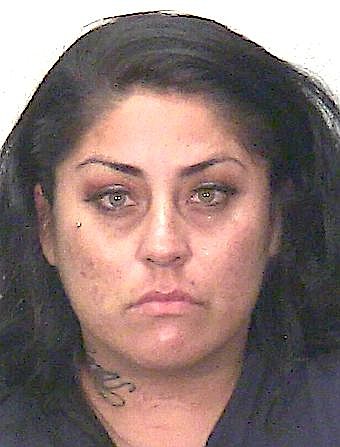 A woman who was warned that her behavior could have an effect on her sentence after being released on her own recognizance was sent to prison Monday.

Celestina Renee Ortiz, 29, is serving 12-30 months concurrent with a Churchill County case, she picked up while waiting for sentencing on a Douglas County case which occurred July 20.

According to court documents, Ortiz and co-defendants Kelly Ann Conway, 37, and Surina Clairmont, 37 admitted to grand larceny after they rolled $1,970.45 in groceries out of the Gardnerville Walmart. Ortiz was given credit for 27 days.

The charge could have been treated as a gross misdemeanor.

The women admitted loading up carts filled with groceries and pushing them out of the store past security.

• A nationwide warrant was issued for Erik J. Edwards after he failed to show up to court Monday.

According to court documents, Edwards, 27, was granted diversion on an embezzlement charge and was ordered to pay restitution and participate in Western Nevada Regional Drug Court in March 2017.

Edwards admitted he embezzled $1,240 cash and five smart phones from the Gardnerville Verizon store where he was working. He was ordered to pay $4,300 in restitution. He completed drug court, but hadn’t paid his restitution.

• A woman who attempted to steal a man’s wallet then accused him of sexual assault is doing five consecutive weekends in Douglas County Jail as a condition to the suspended 364 days she received on Monday.

According to court documents Alexis Cassandra Castillo, 32, was gambling at the Harrah’s Casino in Stateline when she asked the victim to join her in the women’s restroom after asking him for money.

She then called her boyfriend to come into the restroom and upon seeing the victim, the boyfriend struck the man several times in the face. That’s when Castillo attempted to leave and grab the man’s wallet on the way out. She later gave a false report to the deputies who responded to the scene that the man tried to sexually harass her.

“This is not who I am, it was all a mistake and is not something I will ever do again,” Castillo told the court.