Celebrating all of our Nevadaness 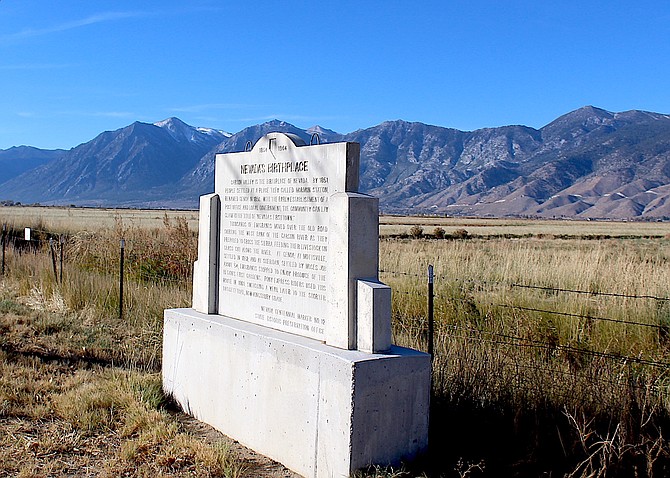 A monument recognizing Carson Valley as Nevada's birthplace stands at Highway 395 and Genoa Lane with the same mountains people have admired for millennia standing in the background.
Photo by Kurt Hildebrand.

OK, that’s not how Bertha Rafetto’s ditty celebrating the Silver State goes, but with the current spirit of contentiousness pervading our daily lives, it seems like it might be a solid edit.

Across the Great Basin there is concern that piñon, Nevada’s oldest state tree, are encroaching on territory usually occupied by sagebrush, it’s state flower.

And the irony is that both these plants are natives. No water milfoil here. Just a couple of old Westerners having a “shoot-out” at high noon in the Silver State.

This week we celebrate everything about Nevada, and that includes its conflicts. In this land where miners and farmers used to tussle over water, who uses it and how still raises hackles.

In a state where people come and go at an alarming rate, it doesn’t take all that long for a newcomer to become an old-timer as more folks arrive and others leave.

Nevadans traded Columbus Day for the day celebrating our statehood, and then up and moved it so more people could come to the celebration.

Nevada’s anniversary of statehood is Oct. 31, 1864, and the state is taking a day off on Friday with a parade on Saturday, leaving Halloween to the Trick or Treaters.

With Douglas Tigers in orange and black, we can’t think of a better day to celebrate our Nevadaness.